The BDI (Baltic Dry Index), following three days of stagnation at 636, lost five points today and now stands at 631! The Geopolitics is entering a very delicate and “dubious” period where everything is possible to happen. John Faraclas’ daily market recap:

The Panamaxes’ BPI gained four points after a period of slow dropping and now stands at 642 points – coincidentally the same was for the Supras BSI who lost though three points!

The Handies’ BHSI lost three points too, now standing at 389.

So all in all in the middle of the summer – for the Northern Hemisphere with 3/4the of Planet Ocean’s population, hence these levels, the Market is low as generally is during the summer period, but be on guard as with the Climate Change as the winters are going to be mild and the demand for cargoes low… Add the Global recession and see what you get… Add the disarray shipping is in now and see how you will save yourself and your floating investments!

The Wets too, both Dirties and Cleans on a falling modus; the last published BDTI and BCTI stood at 505 – that’s minus four, and 447 – that’s minus five points respectively. Again the same laws apply; we can’t change the climate, but the climate can change us!

Given the recession in Planet Ocean’s economies, consolidation in the Box trade is  a must!

The price of WTI as these lines are written stands at US$ 42.71… Let’s see for how long it will remain below the US$ 45…

The shipyards are in tatters, particularly in S. Korea and China; so whatever happened to the mighty yards there…

What’s the fast one behind Russia’s invite to China to support the Zvezda shipyards? Given the interest of COSCO in Greece for Piraeus and  Thessaloniki and possibly other projects too, let’s see China investing on a joint venture with Greece’s ailing shipyards!

Panama Canal is doing well and projected for even better days!

Despite also many hiccups and bunkrupties as well as many companies losses, this is also the best time to further your shipping portfolio! The best ever buyers’ market. Need though to see some “regulation” and scrap more tonnage, although the real issue to tackle is the new modus operandi of trade, which includes shipping. We also expect some investigations on the ethical part  for the inability of many to repay loans and losses in the stock markets…

We also bring you some interesting info from VesselsValue who put together some statistics comparing the buying, ordering and scrapping acitivity between H1 2015 and H1 2016. The numbers show a change in behaviour for ship owners across the world. 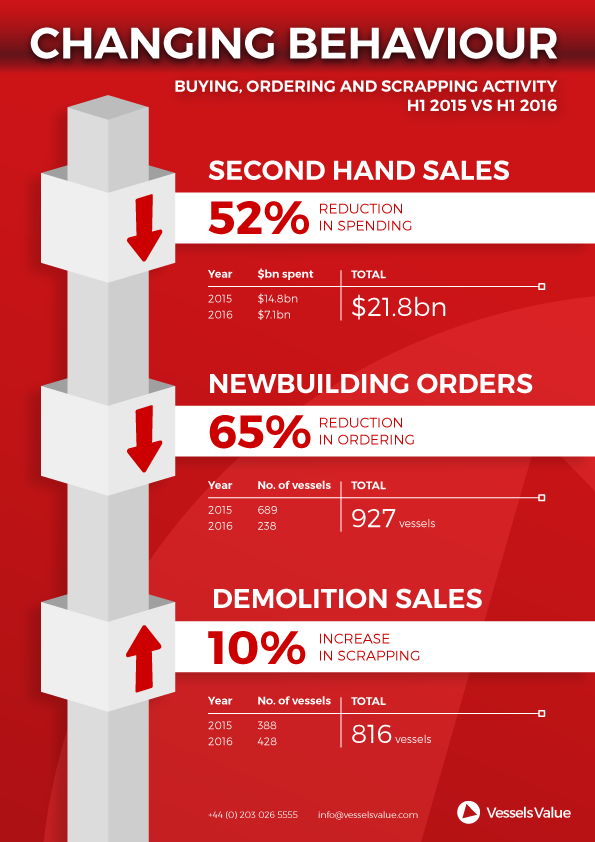 Geopolitics continues to be governed by the Migrants issue; full stop and period. The EU and in particular Germany believe that Turkey will stay put, but… Turkey wishes to spoil the social cohesion of Europe.

Today’s meeting at St. Petersburg between Presidents Putin and Erdogan, serves as a message of the Turkish blackmail towards the West and Western values, but above all treaties. The European Union for over sixty-five years has supported, together with the America, the wrong horse! We must all be on guard. Wonder how much Putin trusts Erdogan gestures for Peace and re-approachment! It sounds also as an oxymoron to have two major joint energy projects (TurkStream gas-pipeline in the Black Sea and the Akkuyu nuclear plant being built by Rosatom in Turkey) with an Eastern Power like Russia and not with a Western one. All things being equal, they are both difficult bedfellows, but both target the destruction of Europe under their own agendas and an advance, even by shifting frontiers, towards the EU!

In Syria, Aleppo no matter who the winner is, it will symbolise the destruction of diplomacy! Shame!

In the wider area with too many issues at stake: ISIS, Kurdistan, Turkish post-coup mess, the Palestinian issue, and Israel’s defence, and many more, things might get even worse with incalculable repercussions! Iran and Saudi Arabia are watching…

Be alerted with Terrorists, terrorists of any kind, so long as we don’t see a fully militarised so to speak world. We must stop and check, double and triple check travellers who head for a tourist adventure and end up in being fighters and terrorist pestering the world at large! Caution!  Ensure all Airports and their Terminals are really safe! Ensure all Ports and Sea-Terminals are safe too. Ensure the Dire Straits of shipping and all sea-lanes are safe. Step up measures to counter to this despicable religious Islamist warfare!

BREXIT continues to get its act together; a very interesting issue which will make it possible for Great Britain’s metamorphosis! We support the BREXIT idea and look forward to its success for the benefit of the British people!

Greece is in the footsteps of BREXIT; it will be more than interesting to see this happening in a very coordinated manner! Greece is a self sustain country and this can surface once these clientelle regimes, who govern the country, go home! We remind you of our proposal for a new electoral reality to free Greece and its people from scams, scandals and corruption. See our previous reports; search and find out what really must happen! Only a proportional representation, one candidate per party per constituency, three centum threshold for a party to enter the Greek Parliment, a reduction to 200 MPS (from 300) and voting to remain at 18 !

In the US, the fight between the two presidential candidates in the run for the White House will become more than heated. Meantime let’s see how Delta Airlines, which is still on recovery mode, will cover its losses given an unprecedented case in its IT systems and passengers in 2016 expect to be treated accordingly…

In the Rio Olympics where the big fight continues between the US and China for the medals, Greece’s 19 year old  shooting star Anna Korakaki from Drama, after her bronze two days ago in the pistol 10m event, claimed gold for the 25m one beating Germany’s Monika Karsh!

Still down in Brazil: What will be Mrs. Dilma Rousseff’s counter if impeachment goes ahead in Brazil?  Eh!!!