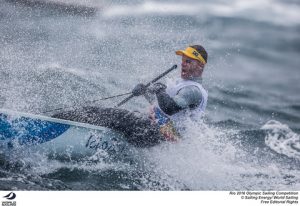 Find out what’s on the agenda at the Rio 2016 Olympic Sailing Competition today and find out further information on how to follow the racing, watch the tracking, download imagery and follow World Sailing on social media.

After seeing the Men’s Windsurfer gold and silver medals wrapped up with a day to spare, there will be sailors in the Men’s and Women’s One Person Dinghies with similar aspirations today.

Rio awoke to blue skies this morning, a pleasant change from the drizzly rain of recent mornings. It’s a bit warmer and, while there’s not much wind at the moment, a light south-easterly is predicted to build from about midday onwards, starting at around 8 knots and building to 12 knots later in the afternoon.

The Laser Radials are scheduled for one race on the Pão de Açucar (Sugarloaf Mountain) course and one on Niterói, so it will take all-round skills to make the best of this critical day. Anne-Marie Rindom (DEN) hasn’t revealed any weaknesses yet, the Dane putting in a very consistent series to hold a ten-point lead. But she is currently discarding a disqualification from race three so she can’t afford any slip-ups. Marit Bouwmeester (NED) sits four points in front of Annalise Murphy (IRL) with Tuula Tenkanen (FIN) not far behind.

Tonci Stipanović (CRO) gave away a lot of his lead in the Men’s Laser after struggling to get to grips with yesterday’s unusual conditions out on the big ocean swell. Today will see the fleet do a bit more ocean racing on the Niterói course for race nine, and then contest their tenth and final qualifying race on the Pão de Açucar (Sugarloaf Mountain) course. Robert Scheidt (BRA) seems to be getting stronger each day and is now just three points off the lead. Tom Burton (AUS) is two points behind Scheidt in third overall, and reigning World Champion Nick Thompson (GBR) is seven points outside the podium.

Giles Scott (GBR) has pulled out an eleven-point lead after six of the ten qualifying races in the Finn fleet. The four-time World Champion doesn’t have any weak points, but now the Finns are off the ocean and back on one of the inner courses, Ponte, it might be the best opportunity for Vasilij Zbogar (SLO) to attack for the lead. The Slovenian double Olympic medallist is strong in the lighter conditions and so Zsombor Berecz (HUN) who is enjoying the regatta of his life, sitting in third just two points behind Zbogar. A few points behind the Hungarian are a whole gaggle of boats all virtually tied for fourth overall and looking to fight their way on to the podium.

If anyone is going to beat New Zealand for the gold medal in the Men’s Skiff, they had better get their skates on today. Peter Burling and Blair Tuke (NZL) justified their billing as one of the hot favourites for gold yesterday, winning both races and taking up their customary position at the front of the fleet. Do Nathan Outteridge and Iain Jensen (AUS) still believe they have what it takes to defend their 2012 Olympic title from the Kiwis? It was a shaky start for the Aussies who sit in 13th overall in the early stages, so today’s performance is critical. Jorge Lima and José Costa (POR) are second, one point ahead of Erik Heil and Thomas Ploessel (GER). With four races scheduled on Aeroporto, it’s a day for making big moves on the scoreboard.

Erin Rafuse and Dannie Boyd (CAN) are the surprise leaders of the new Olympic event, the Women’s Skiff. Less surprising is to see 2014 World Champions Martine Grael and Kahena Kunze (BRA) well placed in second and just a point off the lead. The scores are very tight between the next few with France, Italy, Ireland and New Zealand all within a point of each other. The 20-boat fleet is scheduled for four races on Escola Naval.

The Nacra 17 fleet is at the halfway point of the competition with three heats scheduled on Copacabana today. This will be the first time the frisky, semi-foiling multihulls will take to the big waves of the ocean courses and it could be a fun day for hanging on and avoiding the big pitchpole. Currently two teams sit tied at the top on equal points. The Australian crew’s two race wins put Jason Waterhouse and Lisa Darmanin in first place ahead of Ben Saxton and Nicola Groves (GBR), while in third place and nine points behind the leaders is the Italian crew of Vittorio Bissaro and Silvia Sicouri. New Zealand, Argentina and Austria are also well positioned to attack the top three.