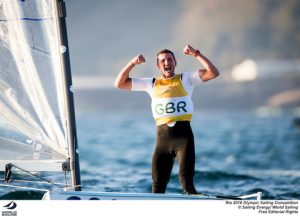 As the RS:X fleets did battle in their Medal Races, the Finns, 470s, and Nacra 17 fleets continued their racing across Rio de Janeiro. Giles Scott (GBR) has won gold in the Finn with a race to spare. The reigning Olympic Champions in the Men’s and Women’s 470s are struggling to defend their titles. And the oldest sailor in the competition is showing his young Nacra 17 rivals the way round the track.

Giles Scott (GBR) won the gold medal in the Finn without needing to contest the Medal Race on Tuesday. The four-time and reigning World Champion was always expected to dominate the competition in Rio but where other favourites have faltered at this tricky venue, the Great Briton has delivered exactly what was expected of him. An eighth and second place from Sunday’s races on the Niterói course were sufficient to give him the winning margin.

For the 28-year-old, this has been a long time coming. Many believed he would have won gold four years earlier at London 2012, but he had to bide his time as Ben Ainslie earned selection ahead of him and went on to win his fourth Olympic gold in a tense Medal Race where the outcome of the medals was in doubt until the very last second.

No such doubt for Scott, who has avoided having to earn his gold medal on the vagaries of the fluky Medal Race course under the shadow of Sugarloaf Mountain. Even the usually invincible Briton looked mortal as he opened his Olympic campaign with a 17th place on the Sugarloaf course earlier in the week. Since then however, Scott has scored seven of the ten qualifying races inside the top three, and three of those were race wins.

Scott doesn’t normally show much emotion, but today he did. “I know what it meant to me because of the way it made me feel towards the last stages of that final race. I just found myself welling up and in tingles as it slowly dawned on me what I’d done. I wouldn’t put myself down as the emotional sort but I had a little cry to myself which I like to think I don’t do that often. Just the emotions that come out of you in that situation you can’t prepare yourself for. It’s been amazing. 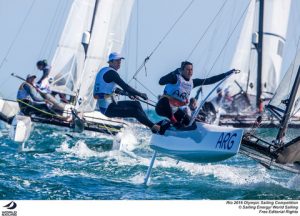 “When we put the campaign together after London, Matt [Howard], my coach and I we decided that we wanted to campaign flat out. We weren’t going to go soft in any regattas and everything we went to, we wanted to win and win it in style.
“That approach is great but it does put a target on your back. Especially two or three years out that target inevitably gets closer as everybody ups their game. To have been able to maintain that gap enough into the Olympics with a race to spare – it gives great justification to those decisions earlier on.”

While others might not be that surprised at the level of Scott’s dominance, he certainly was. “If you’d have asked me, would I have won the Olympic Games before the Medal Race in Rio? I’d have said absolutely not because of the venue that it is. The racing that we’ve had this week I’ve managed to sail more consistently. It’s such a privileged situation to be in because the two days from now, everybody else is going to be fighting it out for those medals. It’s going to be incredibly stressful and to be able to say I’m not going to have to go through that is pretty nice.”

With a 24-point lead over second place, Scott will sail Tuesday’sMedal Race as a formality. Vasilij Zbogar (SLO) holds a 13 point lead over Ivan Gaspic (CRO), which sets up the Slovenian nicely for the silver medal, while the Croatian will have to be mindful of the fourth and fifth placed sailors, Caleb Paine (USA) and Max Salminen (SWE) in the fight for the remaining medals.

Jo Aleh and Polly Powrie (NZL) won race six of the Women’s 470 only to discover they had been UFD disqualified for crossing the start line too soon. Having already picked up a disqualification from race one, the reigning Olympic Champions now have a mountain to climb if they’re to win a repeat gold.

Hannah Mills and Saskia Clark (GBR) continue to hold the lead, although the team now closest to them are the Americans four points back, Anne Haeger and Brian Provancha (USA). Third place is held by Tina Mrak and Veronika Macarol (SLO), although just a point behind are reigning World Champions Camille Lecointre and Hélène de France (FRA) and a point further behind the French are Ai Kondo and Miho Yoshioka (JPN).

Sime Fantela and Igor Marenic (CRO) have extended their lead over arch-rivals Mat Belcher and Will Ryan (AUS). Once again, whatever the wildly variable conditions in Rio can throw at the Croatians, they seem to have an answer and today the result was 3,4 for Croatia, 8,10 for Australia. With an 11-point gap between them, Belcher will really need to turn it on for the final three qualifying races if he’s to retain his Olympic crown.

London 2012 silver medallist Luke Patience (GBR) and his crew Chris Grube had a torrid time of the racing, picking up a UFD disqualification followed by a 20th place, which has dropped the British from third to tenth overall. This moves Panagiotis Mantis and Pavlos Kagialis (GRE) up to third.

Santiago Lange and Cecilia Carranza Saroli (ARG) have won the qualifying series in the Nacra 17 fleet after rounding off their scores with a second and first place. This means that Lange, the oldest competitor in the Olympic sailing competition at 57, holds a five point lead over Vittorio Bissaro and Silvia Sicouri (ITA) going intoTuesday’s Medal Race. There are seven teams with a shot at gold, the others being  AUT, AUS, NZL, SUI and FRA. Billy Besson and Marie Riou (FRA) couldn’t follow up with the quite the stellar performance of the previous day, yet the four-time World Champions do have the slimmest of opportunities to come away with the Olympic title. That would be quite a turnaround after the week Besson has endured with his painful and debilitating back injury.

Captain Padrón visits the STSNS at the University Cantabria