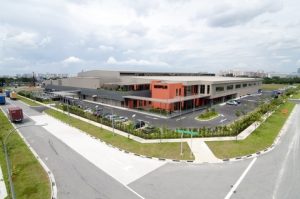 Facilities will feature new manufacturing capability for Caterpillar Marine’s Propulsion business to build the company’s range of MTA azimuth thrusters and MTT tunnel thrusters. The new Marine Center will have the capability to produce the full line of thrusters including additional capacity to produce the new MTA 9 with rated power exceeding 3.5 MW, as well as Caterpillar’s expanded series of thrusters dedicated to the tug market. The center will also house members of Caterpillar Marine’s Propulsion Systems Solutions team, who work on the development of advanced and innovative marine propulsion system concept designs.

This location already functions as Caterpillar Marine’s sales and service hub covering MaK™, Caterpillar Marine and EMD branded medium speed diesel engines for the Marine, Power Generation and Oil and Gas markets throughout the Asia Pacific and Oceania region. As part of this latest commitment to Singapore’s maritime industry, the new center will allow Caterpillar Marine Asia Pacific Pte Ltd dealership to expand its workshop space and capabilities, and consolidate its extensive offsite spare parts inventory to improve the efficiency of its parts operations.

A number of engineering and production employees formerly working at the Caterpillar Remanufacturing operation have been re-engaged to work at the new Caterpillar Marine Center, which is expected be fully operational by the 4th Quarter of 2016.10:54 16/08/2016