470s sweat it out on windless Guanabara Bay 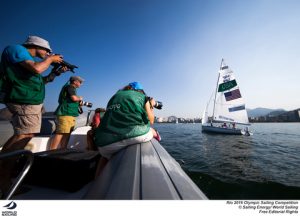 After all the thrills of the previous day, perhaps it was inevitable the Olympic sailing competition would be a bit of a comedown today. Unfortunately, the wind failed to materialise and the 470 Men and Women will have to hold off another 24 hours. Which will set up another bumper day of Medal Races, with four back-to-back finals of 470 and 49er/49erFX skiff racing.

There were a few 470 Women’s teams out on the water readying themselves for a medal battle, including Ai Kondo & Miho Yoshioka (JPN). “We have strong emotions coming from inside and we want a medal today,” said Kondo. “We are aware that the points are narrow but all we can do is our best and hope we have a fantastic race.”

Hannah Mills & Saskia Clark (GBR) on the other hand could relax and enjoy the sunbathing on Guanabara Bay in their gold-medal-winning boat. “It was a really quiet night and we just went for dinner with our boyfriends and our physio,” said Mills. “We crawled into bed around 10pm as we were absolutely exhausted. I actually then stayed awake for another three hours as I was wired yet knackered and my eyes were burning but I couldn’t sleep.”

Mills would have liked to have got the Medal Race completed, but the wait for that gold medal goes on. “You just want to stand on the podium with the medal around your neck so no one can take it away from you. There’s little things in competition that can add points to your score and we want it to be done.” Clark added, “None of us were expecting [to win with the Medal Race to go] in a venue like this as it’s so hard. It’s been seven long days of competition and three races yesterday. It was hard to keep emotional control.” 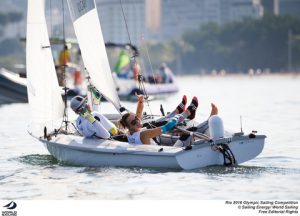 The 470 Men finalists never made it to the water, and they will also have to wait until Thursday when the forecast looks better. Stu McNay and Dave Hughes (USA) are in fourth overall. “We’re always excited for Medal Racing,” said Hughes. “It’s a wonderful part of our sport. Ten boats of high calibre battling against each other always makes for wonderful racing. It’s mathematically impossible for us to go above fourth but our goal is to race our best race and leave the Olympics with good feelings.”

There is a lot more at stake for Mat Belcher and Will Ryan (AUS), carrying the weight of expectation of a gold medal to match the one that Belcher won four years ago. “It’s been a really challenging week for us,” said Belcher. “We said very early on that we wanted to be in a position to fight for gold and we’re in that position and looking forward to the challenge.”

Ryan is at his first Games. “It’s amazing [to fight for a medal]. I’ve been sailing the 470 almost for nine years now with the goal to come to the Olympics and to fight for a gold medal on the last day. I couldn’t ask for more than that and when you look back at it it’s been an amazing experience. It’s been a rollercoaster journey this week but that’s part of the game. We’re in a great position to go out and give it everything and we’ll see how it plays out.”

Belcher was philosophical about their situation on the leaderboard, lying in third place and 13 points behind the Croatian team, Sime Fantela and Igor Marenic (CRO). “The Games are about setting your top performance,” said Belcher. “They [Croatia] came here having won the world championships at the beginning of the year and obviously they’re ranked world #1 and we’re world #2. We knew they were going to come out firing. We are really proud of our performance this week. That’s all we can really control and we expect it to be a battle. You don’t get given it, you’ve got to earn it and the challenges that we’ve had this week we’ve overcome a lot of things and we’re proud to be in this position.”