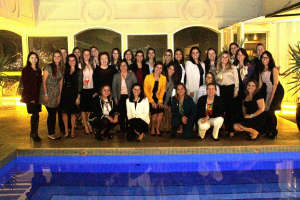 “On behalf of WISTA International and all its members we would like to congratulate WISTA Brazil and wish you a very warm welcome to the WISTA Family!” expressed Ms. Orsel to Fabiana Martins, the President and Founder of WISTA Brazil.  “Your commitment to expanding the WISTA footprint in South America is remarkable, and will benefit women, and the maritime industry, within the region.”

The founding of WISTA Brazil occurred over the course of four years, when Ms. Martins first learned that her friend, Katharina Stanzel of INTERTANKO, had won the WISTA Personality of the Year Award.  When she did some research, she learned that there was no WISTA in Brazil.  Then she began to run into WISTA members at numerous industry events, and saw the power of the “WISTA Sister” network.

While it seemed like a daunting task, to create an organization in Brazil, Fabiana began to lay the foundation.  “It reminded me an Arabic tale: ‘Who plant dates, do not reaps dates.’ This is because the date palms took 80 to 100 years to produce the first fruits. It is said that there was an old man planting dates in the desert when a young man approached him asking, ‘But why do you waste time planting it this will not reap?’ He turned his head and calmly said, ‘If everyone thought like you, nobody would reap dates. Our actions today reflect in the future, if it is not time to harvest it can be time to seed.’”

Unlike the date, Fabiana’s efforts began to bear fruit and the meeting to establish WISTA Brazil was held in July with the formal documentation bringing WISTA Brazil into the global organization approved as well.  Bylaws, a Code of Conduct, election of officers and more have been accomplished by this new national WISTA Association, and they look forward to joining their “WISTA Sisters” in November at the WISTA International Annual General Meeting & Conference being held aboard Holland America’s MS Koningsdam on November 9-13, departing out of Ft. Lauderdale, USA and sailing through the Bahamas.

The Women’s International Shipping & Trading Association (WISTA) is an international organization for women in management positions involved in the maritime transportation business and related trades worldwide. WISTA is a major player in attracting more women to the industry and in supporting women in management positions.  With networking, education and mentoring as our focus, we can enhance members’ competence and empower career success.  Today there are 36 country National WISTA Associations with over 2,500 members worldwide.

For more information about WISTA go to www.wista.net