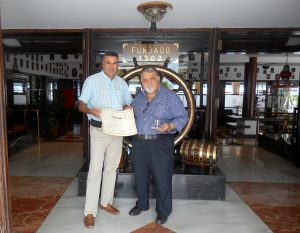 Recently, Capt. Juan P. Morales Chacon, President of the Canary Foundation “Correillo LA PALMA”, gave to Capt. Antonio M. Padrón y Santiago the distinction “Supporter of the Year”, for his continued efforts and disposition to promote the aims and objectives of the Foundation.

In addition to a certificate of recognition, Capt. Antonio M. Padrón received, as present, one of the original rivets from the hull of the S.S. LA PALMA.

The S.S. LA PALMA –contemporary with the Titanic- was launched on April 12, 1912 at the W.Harkess & Son Ltd. Shipyards, located in the English city of Middlesbrough. 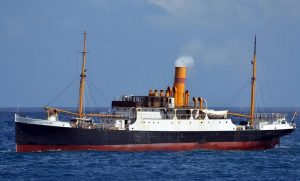 The Canary Foundation “Correíllo LA PAMA”, has the main purpose for collecting the funds for the restoration of the ship and manage her restoration and future uses.

The Foundation continues its works, with appearances on newspapers, radio programs and television, with its presence at different fairs and distributing advertising, always keeping the idea of preserve the Cultural and Industrial Maritime Heritage represented by the S.S. LA PALMA.

This presence is maintained by the voluntary work being carried by its members since the creation of the Foundation.