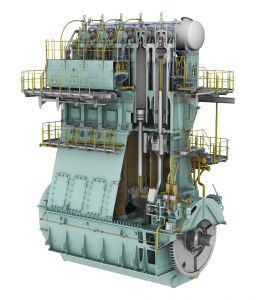 Securing the position of its low-speed low-pressure X‑DF engines as market leaders, Winterthur Gas & Diesel (WinGD) has been selected to supply two 5-cylinder X72DF (5X72DF) engines for each of a pair of 180,000 m3 LNG carriers ordered by South Korean shipowner SK Shipping Co., Ltd (SK). The shipbuilding contract was signed in May 2016.

The twin-skeg LNG carriers will be built by Hyundai Heavy Industries (HHI) and the engines by Hyundai Heavy Industries Co., Ltd / Engine & Machinery Division (HHI-EMD). They will be fitted with a GTT Mark III Flex membrane cargo containment system. In addition, the ships will feature HHI’s Hi-SGAS system combining fuel system supply for the two 5X72DF engines with the Hi‑SGAS system that can re-liquefy 100 % of the boil off gas (BOG) from the cargo. The ships are scheduled for delivery in 2019 with engines being supplied in Feb 2018 for the first vessel and in April 2018 for the second.

This is SK’s second series of 180,000 m3 LNG carriers to be fitted with WinGD’s X‑DF engines. In 2014, SK became the first shipowner to order the low-speed low-pressure dual-fuel engines for LNG carriers. Those vessels are being built by Samsung Heavy Industries and will be fitted with two 6‑cylinder X62DF engines each.

The competitive capital and maintenance costs were a deciding factor for the choice of engine, as was the safety aspect of the substantially simpler and lower-cost LNG fuel handling system, which is designed for a pressure of less than 16 bar. Unlike dual-fuel Diesel cycle high-pressure gas injection engines, the X‑DF engine family employs the low-pressure Otto cycle combustion process, just requiring low-pressure gas compressors, eliminating the need for high-pressure compressors, reducing energy use, equipment cost and maintenance. In the Otto cycle combustion process the ignition of the compressed lean air-gas mixture is initiated by injection of a small amount of liquid fuel.

WinGD’s X‑DF technology also permits stable operation on gas across the entire load range from 5 % to 100 %. Moreover, pilot fuel consumption is lower than with other low-speed dual-fuel engines, because the ignition fuel proportion of the total heat released during combustion is below 1 %.

As well as running on LNG, the 5X72DF engines can also use HFO, MDO and MGO as fuel when required. When running on LNG, the engines can easily meet all IMO Tier III NOx requirements without the need for any exhaust treatment, thereby further reducing equipment and maintenance costs. The ability to meet IMO Tier III NOx requirements is important as the two ships have been contracted on long-term 20-year charters with SK E&S to carry shale gas LNG from Freeport Terminal, Texas, USA. The Freeport Terminal is inside the North American ECA and under IMO regulations all vessels built after 1 January 2016 operating in NECAs must meet Tier III NOx emission rules.

“These new LNG carriers will be the second series employing WinGD’s X-DF technology in our fleet. We find that the competitive capital cost, excellent performance, low maintenance and increased safety as well as highest environmental standards is a very attractive combination and essential for commercial success in the highly demanding sector we operate in,” said Mr. Harry Cho, Vice President of SK Shipping.