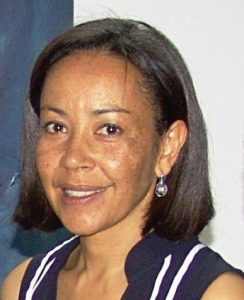 Camille Wekesa, a leading muralist and painter who conveys the glory of Kenyan flora and fauna, is marshalling wide enthusiasm for the arts into the campaign for heightened public recognition of the threat to African wildlife.

Horrified by the slaughter of so many elephant, rhino and other creatures, “my interest in conservation is as strong as ever,” affirms Camille. “I feel that artists are key not only to informing the public at large about what is happening, but in particular young Kenyans must begin to feel part of the conservation movement – otherwise we shall have nothing left of which to be proud. We shall have destroyed part of our national heritage, and tourism — both local and international – will see a sharp decline.”
Her rallying call is backed by her plan to catalogue art from East Africa in terms of landscape, wildlife and African culture.

A company she has founded, Orkedi Ltd  (in the Maasai language orkedi means cheetah), has begun organising exhibitions in Kenya and elsewhere to promote and document the work of the best artists in the region. The main categories are skies, plains and mountains; artistic interpretations of freedom; ancient remnants; African portraits; and tree life. 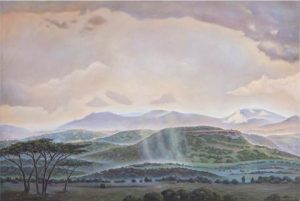 Storms over Mt Elgon. By Camille.

A milestone along the way was the exhibition in which Camille participated, entitledFreedom, celebrating Kenya’s 50 years of independence, at the Nairobi National Museum from December 2013 to January 2014. More recently, her exhibition Skies, Plains and Mountains at Red Hill Art Gallery, Nairobi, from June 12 to July 10 2016 treated of conservation and sustainability.

London is a key platform for Camille’s campaigning: she curated an exhibition of her work and that of another important Kenyan artist named Ancient Soi, at the Deborah Gage Gallery in Old Bond Street in November 2012, and it is likely she will be playing a leading part in another show in the UK in 2017 in support of conservation.

Before returning to Kenya, where she was born, Camille spent several years in London where she made a name on the commercial gallery scene and was featured in Lloyd’s Listand other publications. She spent part of June 2016 revisiting favourite places in Rome and Florence, where she had studied art and design. 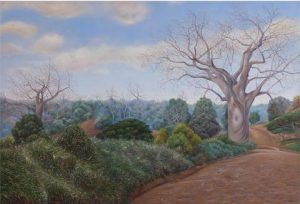 Two years ago, Camille moved from Nairobi to a town called Nanyuki at the foothills of Mount Kenya, “an amazingly scenic area of the country.” She has bought a large piece of land there, part of which is reserved for her art project “which will take me a few years to complete and which I hope will eventually be open to the public. I plan to paint several murals which will take me about five to six years and invite other artists to create site-specific art which would become part of the project.”

The current plan is for eight murals which will each show important sites of Kenya such as Lake Turkana (noted for the discovery nearby in 1984 of a near-complete skeleton of a young boy who died between 1.5m and 1.6m years ago); the Great Rift Valley and Mount Kenya (both Unesco World Heritage sites); and  Samburu and Tsavo game reserves.

Her goal is to build at her property two small cottages for residencies for artists whom she would invite to do site-specific work. She is appealing to public and private bodies for funding for all these projects. 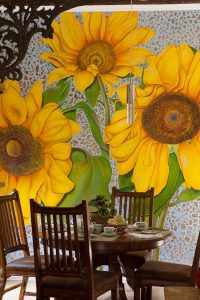 She is meanwhile supporting Lewa Wildlife Conservancy which is a 45 minute drive from her new home, by starting an ‘art in schools’ project as, to the dismay of many educationalists, Kenya no longer has art in its national curriculum. Only students in private schools are able to take art as a regular subject. “This [lack of art classes] was not the case a few years ago, so we are hoping to change this in the not too distant future,” says Camille.

The Matisse Foundation has supported the beginning of this initiative and two sessions with professional Kenyan artists invited from Nairobi have gone extremely well, so it is hoped to raise funds from various sources to roll out the scheme further over the next two years.

Lewa conservancy is a Unesco World Heritage Site and features on the Green List of the successful protected areas of the International Union for the Conservation of Nature. A main aim is to alleviate the extreme poverty of people living within and around its boundaries.

As part of its mission, Lewa supports 22 schools and is keen to engage via the art clubs in which Camille is promoting the enthusiasm of young people for conservation.

“This kind of work is key to the sustainability of Lewa and the other large conservancies in the area, including the Laikipia Nature Conservancy (Camille is a member of its advisory committee), Ol Pejeta, Ol Jogi Ranch, the eco-reserve Segera owned by Jochen Zeitz the former chairman of Puma, and many others.”

Camille completed two murals for Lewa – one for the first conservation education centre for children in the country and more recently one sponsored for the waiting bay of a health clinic supported by Lewa.
Her oil-on-canvas work featured at Red Hill Art Gallery, which is located in the lush green hills just outside the capital. Built to be light and airy, the gallery is tucked away in a beautiful garden with views of the Nairobi skyline. Red Hill owns a large collection, amassed over 25 years, which it says “amounts to a cross-section of the finest modern and contemporary African artwork, including paintings and sculptures.” 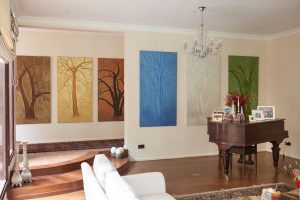 Camille wrote in the catalogue for the Red Hill show that her move from Nairobi has enabled her to spend much more time in the studio “without the constant distractions of living in a large city. It has been a great way to immerse myself in nature, reignite my creativity and reconnect with the stillness required to complete a large body of work – something that I was finding difficult to do in the last few years in Nairobi since my return from London.”

Many of her paintings are based on her several-day hikes on Mount Kenya to sketch in oils, with two extended stays on the mountain which lent “a myriad” of panoramas, particularly the spectacular views from Point Lenana at just under 5,000 m. “Exploring the stunning valleys, gorges and peaks of Mount Kenya and recording the richly diverse plant-life has been truly therapeutic.”

She added: “As a mural artist who trained in Italy, I have always felt more at ease working on a large scale, so I have enjoyed working on the individual large canvases which take up to a year to complete; but completing a series of miniatures and five other smaller works for the show in a space of seven months brought immense satisfaction.”

In a foreword to the catalogue, the conservationist, writer and environmentalist Kuki Gallmann wrote that planet Earth” is going through dramatic environmental degradation, that needs collective commitment to be healed.

“We have forgotten how to listen to the music of the stars, to the whispers of the forests and to the silent magic of unfolding blossoms,” observed Mrs Gallmann.

“It is vital today to call to action all those who can lend their inspiration to influence a movement of restoration and contribute to re-establish the lost balance. Not just the environmentalists and the conservationists, but the ones who can appeal to the largest public beyond the confine of ethnicity, politics and religions.

“Arts for the environment are an invaluable tool that carry beyond the confine of languages an immediate message to the millions of eager people, from the grassroots to the leadership, who are in the position to make a difference, but do not know how.

“The arts quest is a mission whose militants use brushes, musical instruments and the palette of nuances of life. I share with Camille the reverence for nature, the awe for its grace, and the recognition of its magic. Her paintings create ripples of light and clarity. Through her eyes she unveils the souls of trees, undisturbed wild animals, luminous landscapes untarnished by humans, and we can hear her canvas sing.”

Hop fine Cammilie .am always happy of your work. You are great in that of all i met.I interacted with you at one of the schools sponsored by lewa wildlife conservancy. and we had a promise with you since i kepp on waiting for your bright deal.thankyou very much