The Usual Suspects line up for 2.4 Norlin OD glory 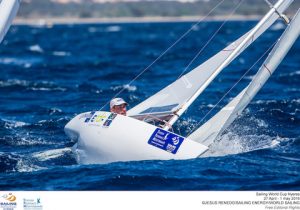 The One Person Keelboat (2.4 Norlin OD) always offers up a host of challengers for the overall title for every regatta, and the Rio 2016 Paralympic Games is no different.

If you move around the boat park at the Marina da Gloria it will not be long before you bump in to a 2.4 Norlin OD Paralympic medallist, world champion, Sailing World Cup winner or challenging newcomer.

Always a calm, relaxed and smiling assassin, France’s Damien Seguin is gearing up for another tilt at Paralympic gold, a medal he hasn’t secured since Athens 2004.

In focus mode, Seguin said, “I feel really good. I’m happy to be here. I’m relaxed. I’ve checked everything with my boat and I’m ready to go. I’ve been excited and relaxed for the last month. I know my job and I know what I have to do.”

Focus quickly turns to the usual smiling Seguin demeanour when asked whether he would prefer to have a lot of people gunning for gold or just a one on one fight, “For this regatta I would just prefer me to be one of the three on the podium. But seriously, I am a competitor and for around two years we have all known this will be a close regatta.” 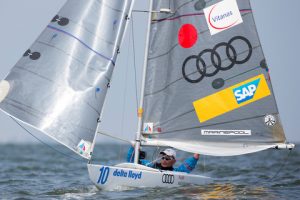 As a multiple world champion, Seguin knows who his competition will be and he begins to reel off a list of his closest competition, “In 2.4 we have a really good level. Germany. Great Britain. Australia. USA. Norway. And also we can have a big surprise. I know I have done everything possible to be the best, and now we play.”

Another multiple world champion in the fleet is Germany’s Heiko Kroeger, and it seems that world champions think alike as he eerily produces a carbon copy of his French compatriots list of favourites, “Of course Damien [Seguin], Helena [Lucas], Matt Bugg, Bjornar [Erikstad] and even Dee Smith. Maybe there could also be a big surprise though.”

The surprises may come, but as current world champion the big German will have a target on his back as a definite one to watch, but of course, this does not even register in the confident and pragmatic thoughts of Kroeger, “I’m used to coming in to a competition as world champion as I have won a lot of titles, but that just proves to me that I know how to win, so it’s good.”

Taking the gold medal at London 2012 and still holding the title of current Paralympic champion is Great Britain’s Helena Lucas. As the only women in the fleet last time around, she will now be joined by Sweden’s Fia Fjelddahl, the youngest sailor in the field at just 17-years-old.

While Lucas has the experience and the titles, Fjelddahl is at her first Paralympic Games, but that doesn’t seem to be effecting the young Swede as she simply says, “I’m excited but I am calm.” 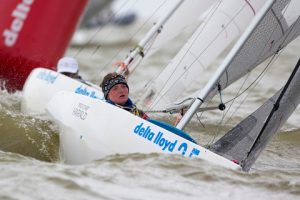 At a high calibre field at the 2016 Para World Sailing Championships in Medemblik, the Netherlands, Fjelddahl got a race win under her belt, but putting together a consistent run of results for a strong regatta could prove to be tough with the amount of International regatta medallists she will be up against, so what is her personal target for Rio 2016? “I want to have fun and learn a lot. Me and my coach have a had a little joke about me winning, but I want to have the focus to just do what I do best.”

As mentioned by Seguin and Kroeger, Lucas will be a contender. She hasn’t managed to win a World Championship, but does have the benefit of a Paralympic gold medal winning experience to draw upon. Australia’s Matt Bugg has quietly been ticking away over the quad and registered his maiden International regatta win at Sailing World Cup Hyeres earlier in the year. Bjornar Erikstad (NOR) is always pushing for medal contention while Dee Smith’s (USA) name has been thrown around among the favourites.

Home nation hopes will be pinned on Nuno Rosa when the 2.4 Norlin OD begin racing at the Rio 2016 Paralympic Games on Monday 12 September at 13:10 on the Pão de Açucar race area of Guanabara Bay.