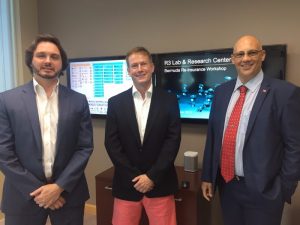 The workshop, held at Bermuda Business Development Agency (BDA) offices last week, brought together technology, underwriting and regulatory experts to explore ways that revolutionary distributed ledgers, based on blockchain technology, could fundamentally change their business—and give Bermuda a leading role in a rapidly-evolving digital economy.

“This isn’t a vendor choice or a technology choice issue that requires a take-it-or-leave-it decision—this is going to be a wholesale move by large parts of the market,” said Tim Grant, managing director of R3 and CEO of its Lab and Research Center (LRC). “What it translates into as a corporate advantage or loss is hard to say at this stage, but the opportunity cost of not being at the table could be significant.”

Blockchain technology, originally built for crypto-currencies like bitcoin, has enabled the development of “smart contracts” designed to automate business processes. The mechanism streamlines transactions, eradicating duplication, avoiding the need for reconciliation of different industry systems, cutting costs and authorising contracts in real time. Dubbed “The Fourth Industrial Revolution” by the World Economic Forum’s Klaus Schwab, distributed ledger technology (DLT) provides a record of consensus using a cryptographic audit trail maintained and validated by separate entities. Multiple parties can submit information to a network and agree on and track complex transactions—a process projected to have applications across global economies and industries.

With units in London, New York, Seoul, Shanghai, Sydney, Tokyo and Toronto, R3 leads a fast growing consortium of more than 60 central banks and other major financial institutions with the aim of developing ground-breaking DLT commercial applications for the financial services industry. Members brought together in its Lab and Research Center experiment with design and engineering of the new technology with the goal of turning it mainstream. With 66 partner institutions to date, including JP Morgan, Goldman Sachs, HSBC, MetLife, Bank of America, Barclays, Ping An and AIA, R3 now hopes to extend its membership to include Bermuda re/insurance multinationals.

“Bermuda is a perfect ecosystem for fintech innovation and reinsurance is an industry with ‘pain points’ that DLT technology may be well-suited to remedy,” said BDA consultant Stafford Lowe. “When members are brought together in R3’s collaborative lab, working prototypes can be developed quickly, knowledge is shared efficiently and a faster route to production can be achieved.”

Lowe said ideas and feedback from R3’s workshop at BDA helped generate “several important hypotheses about where distributed ledger technology could offer Bermuda’s commercial re/insurance market significant benefits. One of our existing R3 members, a major insurer, has estimated it will be able to cut operational costs by up to 50 percent and has told us they are eager to start collaborating with future Bermuda members.

“We are also very excited to welcome the BMA into our regulatory membership programme, which will allow them to follow projects in our lab and network with a large number of fellow regulators from around the world,” Lowe added.

BDA CEO Ross Webber said the agency was pleased to host the three-hour workshop which provided participants with background on distributed ledgers and blockchain as well as R3 and its technology. The forum encouraged discussion on how the technology might be applied to current commercial re/insurance processes.

“DLT is a disruptive technology that could ultimately improve the efficiency of capital by lowering frictional costs,” Webber said. “It’s a paradigm shift. If Bermuda gets on board, it could propel our jurisdiction to the forefront of innovation across financial sectors. We have been working on attracting appropriate fintech companies to the jurisdiction for a while now and we are excited about the possibility of R3 working with industry here to ensure Bermuda remains a global centre of excellence for re/insurance innovation.”

Participants welcomed the session’s peer collaboration and several noted their companies were already looking at DLT and its applications.

“Distributed ledger technology presents a fascinating opportunity for improving the operating efficiency, consistency and transparency across the insurance and reinsurance segment of the financial services industry,” said Hanni Ali, Vice President Risk and Analytics at Hamilton Re, one of the attendees.

“A collaborative effort provides a sensible, open approach in which the Bermuda reinsurance market could take a leading role,” Ali said. “Ultimately, the concept of a shared perception on top of a shared ledger could reduce the arduous reconciliation processes common in our industry. It could improve consistency and accuracy across participating entities and significantly lower costs.”

R3 plans to continue talks with the island’s reinsurance companies, and present its findings to the Association of Bermuda Insurers and Reinsurers (ABIR).

“This was encouraging and fruitful,” R3’s Grant said of the workshop. “What I heard from the industry present was a treasure trove of new projects. There was more than enough enthusiasm, collaborative spirit, and an appetite to potentially disrupt the status quo—that, to me, is a slam dunk.”