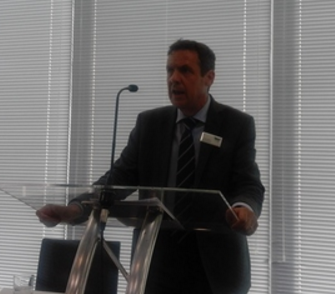 Trade association Interferry will be highlighting the ferry industry’s latest political challenges at its 41stannual conference in Manila next month – and this year a unique new subject will feature alongside the event’s customary warnings on the impact of new regulations.

In June a national referendum saw Britain vote to leave the European Union, a so-called Brexit result that could hit the ferry sector especially hard according to keynote speaker Guy Platten, CEO of the UK Chamber of Shipping.

Mr Platten suggests that, while there are clear opportunities for the UK maritime industry post-Brexit, the ferry business is the one sector that could be negatively affected.  His conference speech will outline potential implications including:

On the positive side, Mr Platten cites the possible restoration of duty-free sales and simpler VAT accounting rules for freight traffic.

“At the end of the day the shipping industry, and the ferry sector in particular, will cope with whatever is thrown at us,” he stresses.  “Certainly a number of our ferry members are concerned about the potential adverse impacts and the UK Chamber will be working very hard during forthcoming negotiations to mitigate the risks and capitalise on the opportunities.

“A lot will clearly depend on what sort of trade deal Britain strikes, including whether we remain in any customs union.  I will be reassuring our international partners that the UK is very much open for business and not embarked upon some sort of isolationist mission.”

Meanwhile ferry operators are bracing themselves to comply with a fresh tide of environmental challenges that will be explained at the conference by Interferry regulatory affairs director Johan Roos.

After an epic ratification process, the IMO Ballast Water Management Convention will finally enter force next September after reaching the required 35% of global gross tonnage with Finland’s recent accession to the treaty.  Strongly supported by Denmark, Interferry has long argued that damage caused by invasive species is not a short-sea issue and has proposed that ships continuously operating within a limited geographical area should be exempt from fitting expensive treatment systems.  As Mr Roos will point out: “The proposal has yet to be reviewed by the IMO, so in the meantime we are encouraging member states to develop a flexible solution – in this way, less time will be lost in finalising the non-application for ferries.”

Another major lobbying action involves the Energy Efficiency Design Index that came into force last September for ro-ro and ro-pax ships.  During a recent IMO review, Interferry noted that the special formula used for these vessels is too difficult or even impossible to meet.  “Brand new state-of-the-art designs are failing to meet the 20% improvement required by 2020 and many designs fall short of the current 5% improvement mark,” says Mr Roos.  “Based on data provided by our members, we are deeply engaged with the IMO, member states and the wider ferry community to find a solution enabling owners to order new ships.”

Further updates from Mr Roos will focus on impending emissions regulations, which include the European Union Monitoring, Reporting and Verification scheme.  Interferry helped to define the cargo metrics that will be adopted for ferries and con-ro vessels when MRV is implemented in 2018, but is now arguing that a possible future taxation or fee system for CO2 emissions should not apply to shipping due to concerns over ‘an administrative nightmare’ and how the revenues would be used.  The IMO is developing a similar scheme that seems likely to run alongside – rather than replace – the EU’s MRV, so Interferry has joined calls for the tightest possible alignment to minimise the administrative burden.

Following last year’s introduction of Sulphur Emission Control Areas in northern Europe, the October meeting of the IMO Marine Environment Protection Committee is set to decide on a joint proposal from Baltic and North Sea nations to set up NOx ECAs from 2021.  Mr Roos will outline the design implications for subsequent newbuilds, which will need to reduce emissions by some 80% via scrubber or LNG fuel technology.