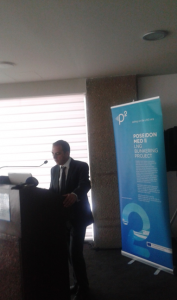 The prospects of LNG as marine fuel and the energy profile of Cyprus were the main areas of discussion among the key stakeholders, during the event organised by the EU-funded Poseidon Med II project at the Amathus Beach Hotel in Limassol on Friday 16 September 2016

The scope of the event was to provide an update of Poseidon Med II project as well as to keep the public abreast on the developments regarding the energy supplies of Cyprus, upcoming regulations and the hydrocarbons exploration activities in the area. Poseidon Med II project partners presented the current status and the progress up today regarding the technical studies for the installations at Limassol port and the vessels involved. The global experience and commercial aspects of bunkering operations as well as the financial instruments to attract investments were also discussed.

In his welcome speech, the Minister of Transport, Communication & Works, Mr Marios Demetriades expressed his pleasure and satisfaction at the involvement of the Cyprus Ports Authority and private Cypriot companies in the Project. Mr Demetriades underlined the great potential of LNG as ship fuel, and noted that it could provide a solution for meeting environmental requirements as its cleaner burning meets all current and future emission standards. He also made specific reference to the regulatory drivers and expertise gained from current projects across Europe.

The Stakeholders’ discussion followed a technical workshop on LNG Bunkering at the Port of Limassol on 15-16 September aiming to assess the prospects and consider safety matters related to LNG bunkering operations in this port. Workshop participants, under the facilitation of Thanos Koliopulos, Global Special Projects Manager of Lloyd’s Register, actively contributed to open group discussions on operability issues surrounding LNG bunkering, technology, safety provisions and regulations. A forecasting model for LNG capacity trade used a specific calculation tool in order to estimate the LNG fuel requirements based on the ship types and associated trade routes at Limassol Port.

Next on the Poseidon Med II events calendar is the Hazard Identification technical workshop, to be held on 19-20 September in Piraeus Port.

Presentations/ Speeches from the Stakeholders’ discussion will be shortly available at:www.poseidonmed.eu

Presentations of the dissemination sessions will be shortly uploaded to www.poseidonmed.eu

At the Shard: The Athens Stock Exchange aiming high…