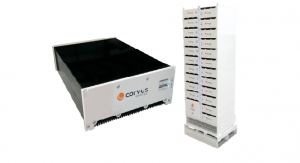 Richmond, B.C. – September 24, 2016 – Corvus Energy is pleased to announce that their next generation energy storage system (ESS), Orca Energy, has officially passed thermal runaway propagation testing as defined by the Norwegian Maritime Authority (NMA). The testing, which was officially witnessed by the NMA and DNV-GL, included three tests in strict compliance with NMA circular Propagation Test 1.

From its very inception, the Orca energy storage system was designed to be the safest ESS in the market. This testing validated that the Orca product line exceeds the standards established by the Norwegian Maritime Authority circular titled “Guidelines for chemical energy storage – maritime battery systems”. This NMA circular requires a series of tests to verify that when safety systems are deliberately defeated and thermal runaway of a battery module is induced by overcharging, the thermal runaway is limited to a single module (containing multiple cells) and does not spread to other modules in the battery pack. The Orca ESS design achieves an even higher level of fault tolerance by eliminating the possibility of thermal runaway spreading to neighbouring cells within a single module. This industry leading capability is called “cell-level isolation”. Corvus Energy reaches this unprecedented level of safety without the need for an active cooling method, such as liquid cooling, further increasing the reliability and safety of Orca ESS.

“By successfully passing NMA Propagation Test 1, we have achieved our objective of designing Orca to be the safest ESS in the industry,” said Andrew Morden, Corvus Energy’s President & CEO. “Our engineers were challenged to create a revolutionary ESS product line that would, above all else, ensure the safety of passengers, crews, vessels and the environment under the most extreme conditions. With the Orca ESS platform, they have achieved that goal.”

The Norwegian Maritime Authority is the administrative and supervisory authority in matters related to safety of life, health, material values and the environment, on vessels flying the Norwegian flag and foreign ships in Norwegian waters. The NMA encourages shipping companies to maintain high standards of safety and minimize harmful emissions.

DNV-GL is the world’s leading classification society and a recognized advisor for the maritime industry. DNV-GL’s objective is to enhance safety, quality, energy efficiency and environmental performance of the global shipping industry – across all vessel types and offshore structures.