From the ARCTURUS operation

Plentiful of interesting and exciting activities was the Q3 of 2016 for the Tsavliris group; viewers can read respective briefings accompanied by pictures:

During the incident the vessel, was on passage from Nueva Palmira, Uruguay to European ports (Spain/Portugal) via Paranagua, Brazil, laden with 44,000 tonnes of Paraguayan soya beans in bulk.

On 6 August the Salvage Master boarded the vessel and upon completion of all relevant inspections and granting of permission by the Coast Guard, refloating attempts commenced with the assistance of “ONA DON LORENZO” and the ship’s engine.

On 7 August the vessel was successfully refloated and proceeded to anchorage for classification and Coast Guard’s inspections. Upon completion of all necessary procedures, the Salvage Master disembarked and the tugboat demobilized to Buenos Aires.

The casualty was drifting south-east at 1-1,3 knots towards shallows, distant

20-25 miles. Apparently, the casualty was a dead ship, without generators, unable to operate windlass. A salvage team from the “FAIRMOUNT SHERPA” boarded the casualty by rescue boat to assist her crew with the towage connection and towage commenced later on the same day.

On 17 August the port tug “STAR VOYAGER” (5,000 BHP – 60 TBP) was dispatched and connected to the casualty’s stern in order to assist (as a steering tug) in the WBG-A anchorage approaches. Pilots boarded both “FAIRMOUNT SHERPA” and “SILVERSTAR” and the convoy proceeded towards ASSPU anchorage. During the transit, a port tug was connected to the casualty’s bow while the “FAIRMOUNT SHERPA” was disconnected.

On 17 August the “SILVERSTAR”, assisted by three port tugs, proceeded, after Customs clearance, to the “Paxocean Shipyard” and was delivered to her owners whereupon salvage services terminated. 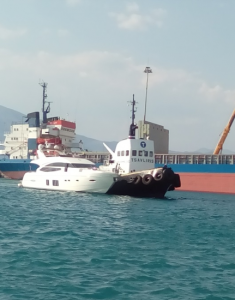 On the same day the towline connection was established and towage to port of Patras commenced.

On 21 August the convoy arrived safely at Patras and the “EMOTION” was berthed alongside with the assistance of “HERMES I”.

Escort services commenced on 25 June (with towlines connected) and were completed on the same day when the convoy safely arrived at Zona Comun anchorage, Argentina.

On 1 July 2016 the ST “TSAVLIRIS HELLAS” (BHP 9,600 – 121 TBP) was dispatched from her permanent salvage station at Ponta Delgada, Azores Island, to the assistance of Passenger (Cruise) ship “BLACK WATCH” (GT 28,613) with 696 passengers and a crew of 365 on board. The vessel was immobilised due to generators’ fire about 250 miles south east of Ponta Delgada.