New sculpture in porcelain has been launched by Damien Hirst at his Newport Street Gallery, a giant exhibition venue a short distance across the Thames from such globally important landmarks as the Houses of Parliament, the International Maritime Organization and Tate Britain.

The presentation afforded the opportunity to explore the current blockbuster retrospective at the gallery of another giant of contemporary art, Jeff Koons.

Ahead of the 2016 edition of the huge art fair Frieze at Regent’s Park, London, from October 6-9, Hirst’s Other Criteria shop displayed his Myth and Legend, two hand-painted porcelain sculpture editions. 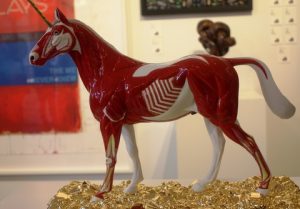 The pieces – a unicorn and a Pegasus-inspired winged horse – recreate the artist’s bronze sculptures of the same titles. Handcrafted by Nymphenburg Porcelain Makers in Munich, they show an anatomical cross-section of the creatures, revealing the flesh and musculature beneath a horse’s skin.

Hirst continues to use installation, sculpture, painting and drawing to explore the complex relationship between art, life and death, and commercialism, and while doing so has amassed a hugely valuable personal art collection, including many of the works of Koons. 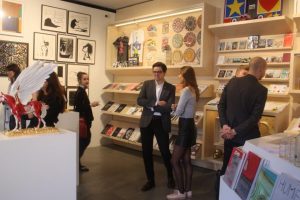 He said: “In a way, science brings religion down to earth and to cut open mythical creatures and expose them as no different to mortal horses is somehow still magical. It’s kind of like exploding a myth to make it real. I like the way that even by showing these creatures’ insides they still feel majestic and hopeful, so they seem more real and not just creatures from fantasy. Maybe they can even help us in the real world.”

Damien Hirst came to public attention in 1988 when he conceived Freeze, an exhibition staged in a disused London warehouse of his work and that of his contemporaries at Goldsmiths, part of the University of London. Since then Hirst has become one of the most influential artists of his generation, with more than 80 solo exhibitions and a solo retrospective at Tate Modern, London. 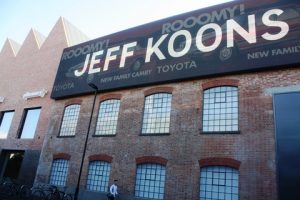 Hirst’s spacious gallery has just reached its first anniversary. Other Criteria moved from its Mayfair premises into the Newport Street Gallery in October 2015, transforming what was once a workshop for scenery painting for West End Shows and later artists’ studios, into a superbly-designed complex including retail shop where editions of familiar Hirst works such as those comprising spots, butterflies and skull can be bought, and restaurant with decor themed on his medical drug-packet works.

Newport Street Gallery is the realisation of his long-term ambition to share his art collection with the public. Designed by architects Caruso St John, the gallery spans 37,000 sq ft and includes six exhibition spaces – one with a ceiling height of 11 m – over two levels. It is specifically designed to allow for the installation of large sculptures – fittingly, in the case of the output of Jeff Koons. 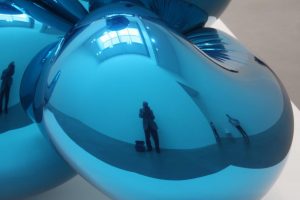 Construction of the gallery took three years and involved the conversion of three listed buildings, which were opened in 1913 to serve as scenery painting studios for West End theatres. With the erection of two new buildings, the gallery now impressively accounts for half the length of its street.

Located in the Vauxhall area, Newport Street Gallery is a short walk from Tate Britain and admission is free. Damien Hirst is quoted as saying: ““What we set out to do was to make modern art approachable and attractive. Other Criteria is all about working with artists to make things that they want to create and other people want to buy.” 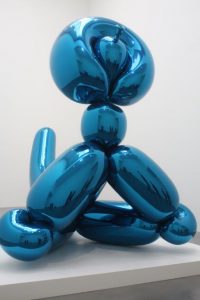 Like Hirst, Koons enjoys widespread fame. Since the late 1970s, his diverse work has explored public taste, consumerism, mass culture, beauty, and the role of the artist.

Under the title Now, the current show is the first major UK exhibition to be devoted to the artist since Jeff Koons: Popeye Series, at the Serpentine Gallery in 2009. It presents 35 years of the artist’s extraordinary career, with more than 30 paintings, works on paper and sculptures. Several are being shown for the first time in the UK.

The exhibition is described as “tracing the development of the artist’s radical reconfiguration of the readymade,” and includes one of the earliest works, Inflatable Flowers (Short White, Tall Purple) (1979), a vinyl blow-up flower displayed on a mirrored floor tile.

A pointer to one of Koons’s most enduring themes – the inflatable – it is presented alongside his displays of Hoover vacuum cleaners. Part of The New series (1980–1983), the wall-mounted Hoovers  are immaculate, unused household appliances in fluorescent-lit, acrylic boxes and date from his time as a Wall Street commodities broker. Two of the Hoovers were included in his first solo exhibition, at New York’s New Museum in 1980. For the artist, the readymade, whether in the form of a child’s toy, Baroque sculpture or advertising billboard, provides “the most objective statement possible”.

After the Hoover period, Koons embarked on his investigation into the means by which objects are represented and communicated. With sculptures cast in stainless steel, he returned to the inflatable, replicating objects in the gleaming, simulated opulence of the material. Seemingly fragile, air-filled vinyl blow-ups and balloon animals are reproduced with cutting-edge technology, sometimes on the monumental scale of Balloon Monkey (Blue) (2006–2013). That dominant piece fills much of Newport Street’s double-height gallery. The reflective surfaces of this and other sculptures serve to “constantly remind viewers of their existence.”

His glowing porcelain “balloon dogs” are on sale in the Other Criteria shop at £7,800 each. 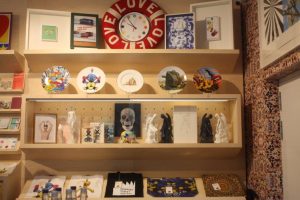 His knack for elevating the stature of childhood toys and other items from kitsch objects to high art has made his name synonymous with the art of mass culture, says the Newport Street commentary. Curator and critic Norman Rosenthal speaks of the “manifestations of a joyful acceptance of American culture” that he produces.

Gallery 3 has a strictly no-photography rule for visitors. This is hardly surprising as it contains explicit images of Koons having sex with the Hungarian-born, naturalised-Italian pornography star Cicciolina (Ilona Staller) whom he married in 1991.  The marriage ended three years later. Such artworks elicited outrage from some people when they were in a series called Made in Heaven exhibited in New York. In that series, Koons said he was investigating the stigma and shame inherent in contemporary conceptions of sexuality, 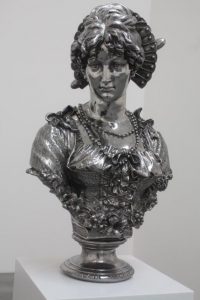 Myth and Legend are currently available as a set; and available individually from February 2017, at £33,000 to £67,000  inc VAT. The porcelain edition of 20 is published by Other Criteria.