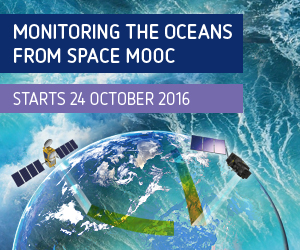 Tracking the paths of storms and the spread of pollution, helping improve maritime safety and weather forecasting, supporting fisheries and monitoring the effects of climate change are just some of the myriad uses of data from ocean-monitoring satellites.

EUMETSAT, the European Organisation for the Exploitation of Meteorological Satellites, is offering anyone with an interest in learning more about the monitoring of oceans from space a free, five-week massive open online course (MOOC).

The course, starting October 24, is funded by the EU through its flagship Earth observation environmental programme Copernicus, and will run during a timeframe new data and products from the Copernicus Sentinel-3A ocean-monitoring satellite, which was launched in February, progressively become available.

EUMETSAT Training Manager Dr Mark Higgins said the course would show participants how to access the wealth of ocean-monitoring data that is being collected by satellites every day.

“The course brings together experts from throughout Europe and beyond and shows not only the sheer amount of data available but also how this data is used to monitor the health of the oceans,” Mark said.

“This course will explain how it is that we know what we know about the oceans and the very significant role satellites play in this.”

Topics to be covered in the MOOC include why satellite data are used; oceans and climate; weather and hazards such as tropical storms, storm surges and icebergs; and monitoring water quality.

The course is provided through the online learning platform FutureLearn and it has been developed for EUMETSAT by Imperative Space in partnership with Plymouth Marine Laboratory, the National Oceanography Centre (Southampton), CLS France and NASA JPL,

Sentinel-3A has been described as, “the most beautiful satellite ever built for oceanography” and will vastly increase the amount of data available about our oceans.

EUMETSAT is responsible for the day to day operations of Sentinel-3 and for processing and disseminating its marine data stream.

One of the main users of the data is the Copernicus Marine Environment Monitoring Service (CMEMS), where experts interpret and make available data relating to four key application areas: marine resources, maritime safety, coastal and marine environment and climate monitoring.

CMEMS collaborated in the making of the “Monitoring the Oceans from Space” MOOC.