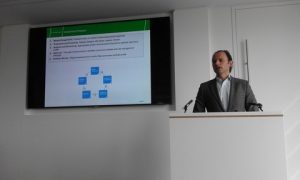 Entrepreneurs have failed at strategic hurdles, but there are some success stories to report: that was the answer to the question Equity & Shipping: Sustainable Partnership? under consideration at the latest buffet luncheon gathering of the International Maritime Industries Forum.

Christoph Toepfer of London-based Borealis Maritime, a company which has taken to the eminently choppy waters of raising capital post-global financial crisis offered a run-through of the experiences of his company, with a glance at what was happening more generally in that arena. 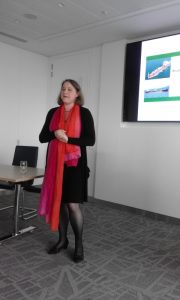 He was speaking on October 7 2016, and the venue was the heady new London and international headquarters of Ince & Co LLP, the sky-reaching Aldgate Tower, at the edge of the City.

Mr Toepfer and his business partner Frederik Rye-Florentz established Borealis Maritime in London in 2010. “I did not expect that six years later we [the markets] would still be in the crisis.”

Although Borealis is said to have made a success of its strategy, Mr Toepfer was unable to offer a magic formula for all in the shipping business. He summed up the Borealis approach as: “Keep your options open. You do not want to lock yourself into which way to go.” Reviewing the strategy was a constant process: “we are thinking every day about what can we do, what shall we do.”

In his presentation, Mr Toepfer declared from the off: “We are not a normal shipping company. We focus very much on working with investors.

”We combine investment and structured finance skills with comprehensive experience in the commercial and technical management of maritime assets.” Capital is raised from equity, and family offices. The partners make opportunistic investments across all shipping segments (the current fleet list comprises chemical tankers and container feederships), with a particular focus on investing capital (debt and equity) in conjunction with debt restructurings and distressed situations in sectors with short-to-medium term recovery potential. 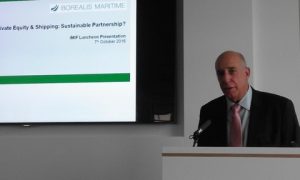 Mr Toepfer pointed out that the shipping sector was heavily dependent on bank lending, but in 2013 raised more than $7bn in private equity. He asked: “Was private equity lending just a blip in 2013/14?” Since 2012 what was available had changed. In 2016, many sources of capital were now generally unavailable. Even private equity was limited, while it was fruitless looking to public equity and bond markets, KG structures and mezzanine financing.

One of the challenges facing private equity ventures was that making the exit was tough, and “timing is everything.” He warned further of the potential conflict of interest between management and capital; the fact that making meaningful operational improvements for ships was impossible; and that there were concerns of valuations below net asset value and of  transparency in cost structure. 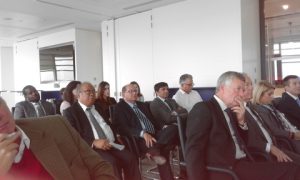 He listed some of the early enterprises which had taken wing with private equity, only to be blighted by disappointing outcomes or failure. Variously, private equity-supported groups had suffered insolvency, fraud, sale, stock plunges since initial public offerings, the need to write down investments to zero, [presumably over-optimistic] large-scale ordering of tonnage, the need for extra capital injection, and unsuccessful debt purchase.

Against this, there were success stories including “tanker plays.” He believed some of the ventures that were looking bad right now would eventually recover.

Lack of other investment opportunities and low yields continued to make shipping an attractive target. Distress situations allowed “deep value entry points,” and maritime assets could provide an attractive yield. Withdrawal of banks from lending opened new debt opportunities, and there was a tremendous build-up of knowledge about the maritime sector. 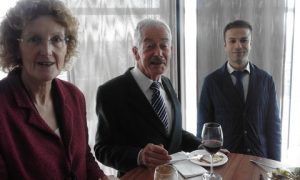 Having dealt with the ‘pro’ points to be considered by investors, Mr Toepfer turned to the ‘contra.’ Billions of dollars of losses had left a life-time scar. “Even when in the money, exit is difficult. Many have not yet appreciated how difficult the exit could be for them.” Volatility had been too much for some. There were those who had bought debt, converted it into equity, the market went down and suddenly the money was gone. The industry had performed much worse than everybody expected, and 2015/16 surprised a lot of people. There was an inability to rely on future cash flow projections, and the danger of being caught in misalignment with partners.

Mr Toepfer was asked for his view of the flood of capital pouring into the market at one stage and the renewed downturn , and whether there could be more intelligent capital – “capital which understands shipping” – leading to less violent swings in the market. He replied: “I think that what is happening now is necessary to wash out some of the problems.” 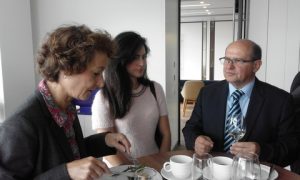 …networking at the pre-talk buffet luncheon Julie Clegg from Stephenson Harwood, Maria Syllignaki from the GSCC and Kostas Ladas from LISCR UK

He said that because shipping was such a hugely capital intensive industry, there was likely to be a significant reduction in the role of the private shipowner, giving way to a more “private environment”. The charterers would be looking much more to professional organisations.

Borealis has assets under management said to be worth a total of $700m. The fleet comprises 73 chemical tankers and feeder containerships. Fourteen are in joint ventures. Borealis has full commercial and technical responsibility for 59 vessels. A total of 49 ships originated from banks.

Mr Toepfrer said of the future for Borealis that the company was constantly weighing up options. “We may merge with someone at some stage.” 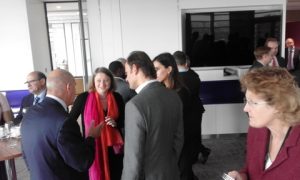 Ince & Co partner Beatrice Russ welcomed IMIF members and guests to the dining area of the 35,000 sq ft office, on the 15th floor of Aldgate Tower, into which the firm moved in March 2016. A splendid selection of lunch dishes helped the pre-meeting networking proceed smoothly, as those present admired the multiplicity of views higher over an array of cloudy London suburbs.

This was the first substantial event without the genial presence of Jim Davis, who has stepped down as chairman of the organisation after guiding it since some of its earliest days.  Mr Davis said at the IMIF annual dinner in November 2015 that at the age of 88 it was time to reduce his commitments – at which he was greeted with a standing ovation for his inspired leadership.

Chairing the meeting, Alan McCarthy expressed thanks to the hosts, Ince & Co partners Renaud Barbier-Emery and Ms Russ.  He said that IMIF brought together global ideas, global processes and perhaps global solutions. A group of IMIF members had been having private meetings to consider the way forward for IMIF and would announce their proposals to coincide with the annual dinner, which takes place on November 2nd. 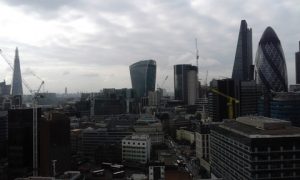 Mr McCarthy said that IMIF was established nearly 40 years ago at a time of great turmoil in the shipping industry. “Now we are in a similar situation, with increased regulation, much more environmental awareness, and incredible developments in things like artificial intelligence and computer-powered robots.”

The Markets are cooling down and the Geopolitics flare up