Ship ordering globally has slowed to a very weak pace, and pressures are building for further yard consolidation and capacity reductions.

This summary of the woes of builders struggling to win viable contracts came from Stephen Gordon, managing director of Clarksons Research, in his presentation to the 2016 conference of the International Union of Marine Insurance.

The weakest level of ordering since the 1980s was expected for 2016, and the same pattern was anticipated in 2017, with the focus on small and niche tonnage. Delivery levels for 2018 were uncertain and “non-delivery” [delays and cancellations] continues, said Mr Gordon.

“It has been a perfect storm for the shipyards,” he declared, with difficulties in finance, most of the major markets hit by depressed freight rates, and little prospect of a better market as we go through the decade.

Ship ownership consolidation, a big change in the financial landscape and increased restructuring, were limiting short term investment and orders.  The market had to face up to accelerating regulation, and technology and innovation opportunities relating to commerce and data. 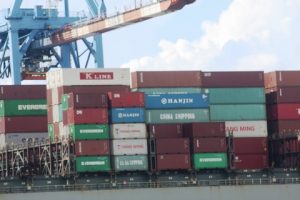 Boxed in to a tough market.

These were “probably some of the toughest years for shipping since the financial crisis,” the leading analyst estimated. Oversupply continued after the over-ordering of 2010 and 2013.

Ocean shipping throughout 2016 was carrying 11bn tonnes of goods (an average of one and a half tonnes for every person on the planet!) which amounted to 85% of world trade. We have added 2.7bn tonnes since the financial crisis of 2008, and “there is still underlying growth in the shipping industry.”

The world fleet was 90,000 ships totalling 1.2bn gt. Value of the fleet was around $650bn, and the order book $190bn. The fleet had expanded substantially since the financial crisis, but the growth is slowing and has fallen to a rate of 2.3%. Better markets were seen in some niches – notably cruise, ferry, and roll-on roll-off.

Higher demolition was recorded in the first half of 2016 with 22.1m dwt of dry bulk carriers scrapped.

Despite the gloom, “we do not feel this market is quite as bad as the 1980s: for example only about 1% of the bulk carrier fleet is genuinely laid up.”

Mr Gordon provided some intriguing statistics about fleet control. Some 51% of tonnage on the water is owned by private companies; and the average owner owns five ships, he said.

The leading nations by control of tonnage were respectively Greece, Japan, China, Germany and the US. In 2010 the league table was topped by Japan, followed by Greece, then China and Germany about equal, and then the US. The Clarkson Research chief highlighted Greece’s active position in the sale and purchase market.

Largest city conurbations (on the basis of a 40 km radius) for fleet control were: owners based in Athens  4,554 vessels of 171m gt; and Tokyo, with 97m gt. Hamburg has the largest liner fleet of any city, at  48m gt, accounting for 70% of the cities’ total for that type. Germany has reduced its market share quite significantly in the last four or five years.

As to smart technology, “it does seem shipping is behind other industries, but hopefully is catching up.”

Turning to the energy sector, Mr Gordon said that in 2015, offshore operations produced 26m barrels of oil per day, a 17% contribution to the global energy mix. Offshore exploration and production spending was down 20% in 2015, and 25% in 2016. There was a 20% reduction in the operating expenditure in the costs of running drill rigs and jack-ups.

The offshore order book currently consisted of 170 units, of which 50-60% were deliverable or waiting to deliver from yards: “these assets might hang around in the shipyards for several years to come.”

Offshore was facing the most challenged market since the 1986 oil price collapse when the market was rocked by overproduction from Saudi Arabia and some others in an effort to increase their market share.

Capers dangerous Skyfall; Geopolitics more than a liability for all…