EFIP members meet in La Louvière: Election of a new President and discussion on the profile of  inland ports of the future

Catherine Maheux, the Director of P.A.C.O., said: “I am very proud that we could host this General Assembly of EFIP. A lot of interesting issues were tackled concerning the “Inland Ports of the Future”, the new website was launched and a new Presidency was elected.”

During the General Assembly meeting, the members elected unanimously Roland Hörner as the newPresident of EFIP. Mr. Hörner took over the position from Hans-Peter Hadorn who was thanked for his appreciated work and commitment as President between 2014 and 2016. Hans-Peter Hadorn, General Manager of the Port of Switzerland, will become Vice-President together with Carmen Costache, President of the Romanian Inland Ports Union, Jean-Louis Jérôme, General Manager of the Port Autonome de Strasbourg and Rainier Reekmans, Commercial Director of the Port of Brussels.

Roland Hörner studied Law in Heidelberg. In 1985, he started his professional career in the senior service of the tax administration of Baden-Württemberg (DE), being in charge of questions of principle regarding investment policies. In 1998, he became port director and CEO of the Staatliche Rhein-Neckar-Hafengesellschaft Mannheim mbH and since 2000, he has been a member of the executive board of the Federal Association of Public Inland Ports. Since 2013, Mr. Hörner has been Vice-President of EFIP, whose president he also was from 2010 until 2012.

After his appointment as the new President of EFIP, Roland Hörner said: “It is a great honour to have been elected as the President of the European Federation of Inland Ports. The role of inland ports, as we have heard today during the session “European Inland Ports of the Future”, is getting more and more decisive for future multi-modal and combined transport in Europe. During the coming years, there will be important dossiers on the European agenda and I am convinced that EFIP will continue to play an important role in shaping Europe’s future transport policy. I am looking forward to strengthen the position of our association on the EU-level together with the members and our secretariat in Brussels.”

The theme of the interactive open session was “European Inland Ports of the Future”. This subject was highlighted from three different angles: the EU perspective, an academic point of view and an economic standpoint. Firstly, Daniela Rosca (DG MOVE – Head of Unit Inland Waterways and Ports) and Dimitrios Theologitis (DG MOVE – Senior Expert) discussed the European agenda for inland ports towards 2020. Daniela Rosca (picture) stressed that “the challenges in inland navigation are specific and global. We need to work with all possible solutions in an integrated and comprehensive approach and share good practices.”

Secondly, the new role of inland ports in the cross-supply chain was presented by Bart Vannieuwenhuyse, co-founder of Tri-Vizor, the world’s first cross supply chain orchestrator. Mr Vannieuwenhuyse said: “The future of logistics lies in smart logistics: bundling of freight and clustering and connecting of activities. Inland ports are at the heart of this challenge.” Finally, Bernard Piette, the General Manager of Logistics In Wallonia, talked about inland ports as the economic backbone of regional and logistic development. These three
perspectives came together in the general discussion focusing on the question “What kind of profile is needed for inland ports of the future?”. 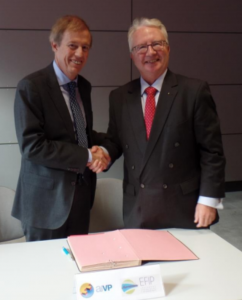 Finally, the President of the Worldwide Network of Port Cities (AIVP), Philippe Matthis, and the new EFIP President, Roland Hörner, signed a Memorandum of Understanding. This MoU will strengthen the cooperation between the two organisation and especially highlight the importance of port-city relations on both the international and European level.

Background information on EFIP:
The European Federation of Inland Ports (EFIP) brings together more than 200 inland ports and port authorities in 17 countries of the European Union, Switzerland and Ukraine. Since 1994, EFIP has been the voice of the inland ports in Europe. EFIP highlights and promotes the role of inland ports. EFIP actively follows all developments in the field of EU policy of importance to inland ports and represents the inland ports vis-à-vis the European institutions and other international bodies. EFIP offers its members the possibility to exchange information, expertise and best practices with colleagues in other countries.
For further information, please contact: info@inlandports.be
Check out our new website: www.inlandports.eu

Call on IMO for action on emissions next week