Directors of Mariana Resources, which is listed on AIM and TSX Venture Exchange, are enthusiastic over the high grades being identified at its flagship gold and copper workings in Turkey.

Their forte is exploration and development. “We do not see ourselves as miners, but we have to extract value for our shareholders,” chief executive Glen Parsons said on a visit to London.

They have, in the words of Mr Parsons, an absolutely unique deposit, in the shape of the Hot Maden gold and copper project in northeastern Turkey, 1,050 km east of Istanbul and 130 km from Erzurum, and close to the border with Georgia.

Amid hilly terrain, the project (the name Hot Maden derives from Turkish terms for a mine or minerals and a grassy place)is close to the Black Sea coast, and it benefits from good infrastructure in the area, including the Artvin-Erzurum highway.

In geological terms, the north-south trending orebody is within the Eastern Pontides metallogenic belt.

“The market never really gave us the recognition for the Hot Maden discovery” with its ultra-high grade mineralisation of over 10 grams per tonne, Mr Parsons told a packed meeting of investment interests in the UK capital, where it hopes that greater awareness of its progress will feed into the share price.

As drilling, testing and economic assessment continue, for the company “2018 is going to be a big year in terms of Hot Maden,” Mr Parsons told the City event.

He sought to soothe any unease among investors about political risk in Turkey.

“We have not experienced any problems in Turkey, despite the coup attempt, despite bombings [in 2016 in Gaziantep, Atatürk Airport, Istanbul city and Ankara.] On the ground, it is operations as normal.” The failure of the July 15 military rebellion meant there was certainty as a background to the company’s operations. 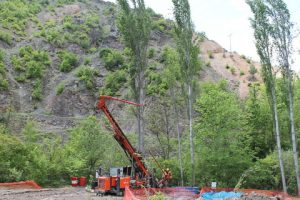 Operator of the mine is Mariana’s Turkish partner Lidya Madencilik Sanayi ve Ticaret. “From a geopolitical perspective, a Turkish partner is probably the best thing we can have,” said Mr Parsons.

Lidya has 70% of Hot Maden and Mariana Resources the remainder. The two cooperate in designing budgets and work programmes.  Lidya, founded in 2010, is among the leading mining companies in Turkey. It is part of Çalık Holding, which with $7.5bn assets is one of the largest industrial enterprises in the country, with interests in energy, telecoms, textile, construction, finance, sea ports and mining.

Hot Maden accounts for at least 95% of the value of Mariana Resources, said Mr Parsons. It consists of one operating licence and three exploration licences, totalling 7,394 hectares (73 sq km).

A preliminary economic assessment is likely to be completed in November and a pre-feasibility study in mid-2017.

One important intercept included a massive sulphide zone averaging 18.3 grams gold per tonne and 3.3% copper. Another impressive intercept showed 20.4 grams of gold per tonne. Anything above 10 grams is considered “bonanza” in the industry. 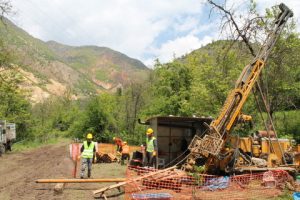 Small scale underground mining of high grade copper veins along the southwestern margin of the Hot Maden fault zone was carried out by Russian interests before 1923.  In recent years, there was little modern, systematic exploration.

Mariana has £4.8m ($6.4m) in the bank, following a £6m private placement in April 2016: “That takes out the funding risk. This is a healthy cash position,” Mr Parsons told the London meeting. Going through the end of next December, $10m would be available for the company’s projects. The worst case scenario would be to find another $30m, but “we could raise that tomorrow if we had to.”

He was speaking to the London gathering just days after Mariana entered an agreement to acquire 80% of a company “with highly prospective gold projects in Côte d’Ivoire.”  Awalé Resources has a portfolio including known gold mineralisation and artisanal gold workings.

Mr Parsons said: “The acquisition has given Mariana Resources a footprint into a fantastic region. Côte d’Ivoire is under-explored.” There are three contiguous licences totalling 1,191 sq km in the Bondoukou area, and four licences under application (1,593 sq km) in the Bondoukou and Abengourou areas.

Mr Parsons said that the opportunity was at an early stage, and “we will probably spend $500,000 over the next six to eight months to get this to a drill-ready stage.” Mariana will be operator of the Awalé concessions.

The deal involves the issue to Awalé shareholders of $544,274 in Mariana ordinary shares, settling some of Awalé’s loan obligations, and paying a bonus based on delineation of the resource, all subject to a maximum of $3.5m. The target is to finalise the share purchase agreement on November 15 2016 at the latest, and close the transaction by the end of that month

Mariana said that it was retaining the services of the founders of Awalé and the in-country team with its experienced senior local geologists.

Mr Parsons saw Mariana’s majority interest in Awalé as “providing potential in one of the most exciting gold jurisdictions in West Africa, especially as the resource market sees continual signs of positive momentum.”

In answer to a question from the audience, he gave a reassurance that the venture into Africa would not be a burden on Mariana’s finances or management time, in line with his earlier statement which said: “Exploration activities for Awalé are currently budgeted within Mariana’s current cash resources without affecting any activities on the balance of the portfolio for next year.”

The make-up of investor backing for Mariana has changed since 2015, when the shareholding was 85% London retail. Since then North American institutions have come in, and now the company has got to a size where it makes sense for London-based institutions to participate. Significant shareholders were now led by Sandstorm Gold with 7.49%, Exploration Capital Partners 2014 (part of the Sprott Group) at 5.72%, AngloGold Ashanti Holdings with 4.08% and Resource Capital Funds VI with 4.43%.

Elsewhere in Turkey, Mariana holds a 100% interest in the Ergama gold‐copper project, 180 km southwest of Istanbul.

In Argentina, the focus is on the discovery of high grade and disseminated epithermal gold and silver deposits in Santa Cruz province.  In Suriname, Mariana holds 10.2% of the Nassau Gold project, a 28,000 hectare exploration concession 125 km southeast of the capital Paramaribo and next to Newmont Mining’s 4.2m oz Merian gold project.    In Peru and Chile, Mariana is on the lookout for acquisitions.

Hot Maden is top of the agenda, Mr Parsons made clear. “We see this as our core project going forward. It has the ability to deliver some significant value down the line. The main value driver is always going to be Hot Maden. Hot Maden is unbelievable value for our shareholders. Argentina remains a strong part of our portfolio, and Chile and Peru are highly prospective regions.”