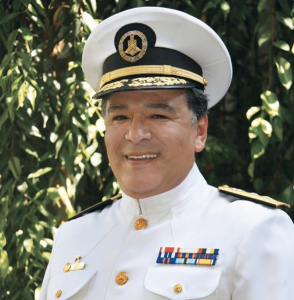 The Massachusetts Maritime Academy (MMA), the oldest existing maritime university in the United States of America, and the International Maritime University of Panama (UMIP) unveiled a plaque in honour of the partnership agreement that has benefited cadets from both institutions for close to ten years. The plaque was unveiled by the Academy President, Rear Admiral Francis X. McDonald, during a recent visit of the current UMIP Rector Ms. Fernanda Billard.

The plaque honours the programme and the former presidents of both universities, Captain Orlando Allard, first president of the UMIP and Rear Admiral Richard G. Gournon, of the Massachusetts Maritime Academy. Captain Allard is a graduate of the Academy, Class of `79, and has continuously contributed towards the strengthening of the relationship between Panama and MMA, whilst encouraging young Panamanians to attend the university. 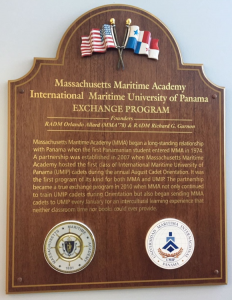 Thus, in 1998 the Academy honoured Captain Allard with the Propeller Club of America Mariner of the Year Award. At this time, most of the 50-plus Panamanian graduates of the Academy are either Panama Canal pilots or towboat masters, or professionals in high level positions in ports and other maritime industry companies in Panama and the region. 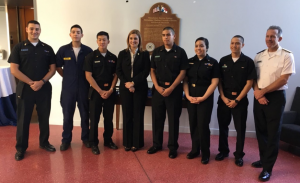 Engineer Fernanda Billard (fourth from the left) , Rector of the International Maritime University of Panama and Rear Admiral Francis X. McDonald,( on the extreme right) President of the Massachustts Maritime Academy, with Panamanian cadets attending MMA at this time.