Companies that put their ships into lay-up need to adopt clear and detailed planning, an adviser on such operations told the 2016 conference of the International Union of Marine Insurance.

As a growing volume tonnage is expected to be made idle, Paul Hill, chief surveyor, Western Europe, for Braemar SA, listed a series of risks to be addressed

“A ship is your pride and joy, so PLAN,” he urged shipowners and their underwriters, many of whom will provide cover for de-activated tonnage.

London-based Mr Hill reminded the conference, in Genoa, that offshore vessels were being put to one side because of the weak oil market, and containerships because of low freight rates. Dry bulk carriers were being hit by the slowdown in the world economy.

The Norwegian Shipowners’ Association reported that in February 2016, 101 of its members’ offshore vessels were in lay-up – a figure expected to rise. 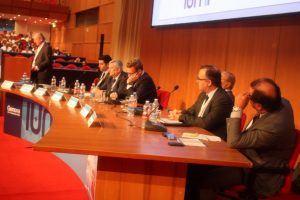 Mr Hill and other speakers on hull risks.

In late February 2016 a reported 346 containerships were idle, according to Alphaliner. Lloyd’s List Intelligence said in September 2016 that 55 bulk carriers were officially laid up, with many more idle. This amounted to only 1-2% of the world fleet, but it was significant.

Practical risks included mooring failure: “Your ship could ‘play dominoes’ with other vessels, and the losses could be massive,” said Mr Hill.

Those responsible for the ship needed to be on guard against piracy, theft and kidnapping. Once a ship was immobile, “it is an easy target.”

Mr Hill outlined a planning checklist to ensure that a proposed layup was safe, and risk mitigated.

Extra care was needed on reactivation: “this is the risky part of the layup. That is where it could all go horribly wrong,” with, for example, major machinery failure.

Mark Edmondson, chairman of IUMI ocean hull committee, agreed that understanding the nuances of the risks associated with lay-up was becoming increasingly important.

Decline in oil: a contagion through Latin America’s related sectors