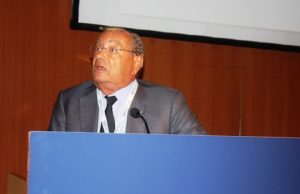 One of the world’s most experienced executives in cruiseship construction has emphasised the growing role that China will play in the market.

Dr Corrado Antonini, president of the Euroyards consortium and former executive chairman of Italian shipbuilder Fincantieri, cited informed opinion that “at the end of the decade, China will be the most important market in the world.” The Dragon might well turn its energies to building the tonnage, too, he surmised.

Dr Antonini, head of Fincantieri until the end of 2012, was addressing the International Union of Marine Insurance in Genoa.

He pointed to the role of new markets for cruise passengers, including China, Australia and Vietnam.

He said: “There are initiatives to move the construction of certain ships to China. It is such a huge market they might very well think of producing ships for their own market.”

There were different demands for leisure cruising from China. Whereas the standard cruise in the west was seven days, in China it is three to four days. Western passengers looked upon cruses for exotic destinations and sunshine, while Chinese passengers did not care so much about sunshine, Gambling was popular in with some western customers, less so in Europe, but extremely popular in China.

In 2010-13 there was a gradual overcoming of the crisis. From 2014-2016 together with the recovery in the US and to some extent in Europe, demand for cruising had increased.

The whole ocean cruise market in the world was 24m passengers, and there were estimates that soon we would reach a target of 30m passengers. The most expensive new cruise ships in the order book cost Euro1bn.

Dr Antonini said that the market was requiring new prototypes because new regulations had been introduced including probability damage stability. The latter involves a revision of SOLAS chapter II-1 to harmonise provisions for passenger and cargo ships based on the “probabilistic” method of determining damage stability.

Dr Antonini has previously said that one in four deliveries is based on a completely new and innovative design or prototype – high tech, advanced vessels.

At the same time, there was interest for smaller ships, more sophisticated, more expensive than previously and which have a special attractiveness in terms of destination. In luxury and niche segments a ship becomes a destination in itself.

Dr Antonini went on: “We did not know that a sea could shrink, but the Mediterranean is a sea that is shrinking when you consider what is happening [with security concerns about destinations] in North Africa, the Middle East and Turkey.”

Individual cruise lines and associations of cruise lines were seeking new places attractive to passengers. To guard against terrorism, cruise lines were operating the same screening as did airlines. Piracy was less of a direct threat, as cruise ships sailed very high above the water unlike bulk carriers. There were three, four or five decks before you get to open space and no attack had succeeded in recent times on that type of ship.

“Cruise ships are the most regulated objects on earth,” he added.

Euroyards, which Dr Antonini leads, brings together the main shipbuilding industries of France, Germany, Spain and Italy in what is known as a European Economic Interest Group. The consortium was set up in the early 1990s. Together with the European Commission and others, it aims to tackle competitive pressures from the Far East, and develops joint programmes in research and common purchasing.