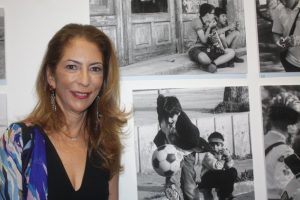 Antigoni Solomonidou Droussiotou is an artist photographer and journalist immersed in chronicling the life and times of her beloved Cyprus.

Some of the fruits of her years of capturing on camera the essence of the island’s residents in what she modestly calls “snaps” are on show for all to see at the Atrium Gallery of the London School of Economics, just off the bustling Aldwych. Her photographic subjects, she says, are people who might be superficially different yet in many ways are strikingly alike.

She entitles the exhibition quite simply Cyprus in Time. The High Commissioner for the Republic of Cyprus in the UK, His Excellency Euripides Evriviades, led praise for the insight and technical skill of Antigoni at the opening ceremony on October 26.

The exhibition was organised by the Hellenic Observatory, one of the largest departmental research units of the LSE, as part of a programme of events to mark its 20th anniversary. It was presented in association with LSE Arts and supported by the AG Leventis Foundation, which is named after the Cypriot entrepreneur Anastasios G Leventis (1902-78), and supports the dissemination of Greek and Cypriot cultural heritage. 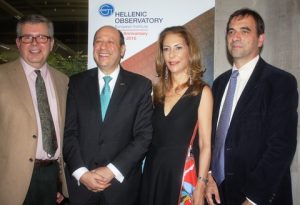 In compelling monochrome photos taken by Antigoni Solomonidou Droussiotou over her years of exploring all of the island, the exhibition portrays salient contrasts in religious and political tradition, daily habits and everyday life, with an occasional nod to the ancient past.

Antigoni said that she found “similarities and differences in the two parts of the island.  Everyday life and people are so similar; we have so many things in common. At the same time you can feel the division from the way we behave.  I wanted to show Cyprus hoping for a better future.”

Limassol, Kyrenia, Famagusta, Nicosia (both sides of the Green Line) and Lefkara (a village famed for its needlecraft) are among places featured, but generally the focus is on people rather than places, whether in carnival, night life, café or religious devotion. 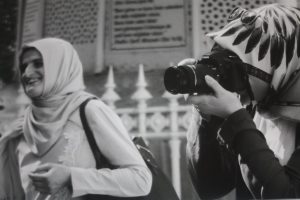 She writes in an introduction to the display: “The photos help to evoke the historical memory of pain and separation, but also the great resilience of the people in Cyprus. Past, present and future are connected by a single thread, with the past writing the present, and the present foretelling the future.”

She is a passionate advocate of black and white photography, which she finds more poetic than colour and endowing the light in the images with a special quality.

The High Commissioner began his remarks by paying tribute to Prof Kevin Featherstone and his team for their contribution to the understanding of Cyprus. Prof Featherstone is head of the LSE European Institute, Eleftherios Venizelos Professor of Contemporary Greek Studies and Professor of European Politics.

“Ours is a young country but with 12,000 years of history,” said the Cypriot diplomat.

He said that Antigoni’s show was a journey back in time, not because it consists of historical projects but because through her lens Cypriot traditions, history, society, politics with a small p, were captured in a time capsule

He referred to the “anachronistic and unacceptable division of our home country,” but said that an exposition such as the current one “brings a soft power” and helped develop “an increasing awareness, historical memory.” Individual and collective awareness was the first and important step in finding a solution to complicated political problems. 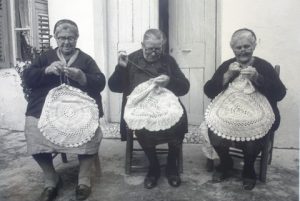 “It has been said that a picture is worth 1,000 words. Antigoni has made 1,000 pictures depicting one word: Cyprus,” said High Commissioner Evriviades. Her work highlighted “the exotic character of our island presented in a kaleidoscope of the domestic sphere, public sphere and natural landscape” – mountain, sky and sea.

Antigoni responded by thanking the High Commission for its support, and referring to what she said were “moments simple and unique, frozen in a snap, registering people.”

In a couple of her photo captions, she writes of some “familiar faces, wrinkled by the sun: Greek Cypriots and Turkish Cypriots humble and brilliant together.” 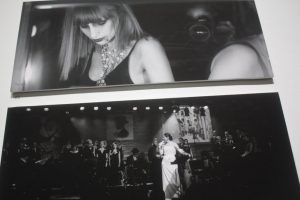 Dr Spyros Economides, Director of the Hellenic Observatory, said that the exhibition demonstrated the Observatory’s growing commitment to the study of Cyprus.

Antigoni studied chemistry at Lausanne University, Switzerland, and decided that it was not the career for her, but she was fascinated by the chemical processes in professional use at the time for developing film, and this increased her keenness on photography.

She studied documentary photography in Wales, and has gone on to have 15 solo exhibitions in Cyprus, Switzerland, Greece, Germany, England, at the European Commission and European Council, in the United Nations Secretarial Lobby, and in Washington at the Capitol. The award-winning artist, who lives in Limassol, has taken part in group exhibitions and represented Cyprus in biennale and international exhibitions, and her photographs are in many private collections. She has published three photographic books and one of interviews with Cypriot politicians and artists. 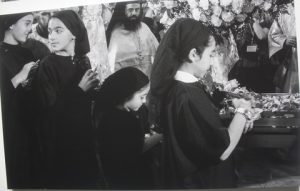 The Hellenic Observatory stems from a 1990s campaign to establish a Chair that would champion the study of contemporary Greek society, politics and economics. The result was the establishment of the Eleftherios Venizelos Chair in Contemporary Greek Studies.  A research unit, the Hellenic Observatory, was set up alongside the Chair to promote the study of modern Greece through the social sciences. This was “a clear indication of the need to facilitate a better understanding of contemporary Greece and especially in its European context,” according to the official history of the faculty.

Boasting these days a substantial position within LSE, the Observatory says: “We can be very proud of this achievement and can justifiably claim to be the premier international location for the study, teaching and research of contemporary Greek politics, economy and society”.

Over the years, the Hellenic Observatory has expanded its staff, greatly increased its public events programme, and developed its research output. The Observatory attracts more than 16,000 website visitors per year, and since 2002  has welcomed over 12,000 guests to its public events.