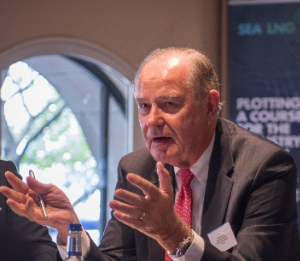 27 October 2016, London – Multi-sector coalition SEA\LNG has announced its board of directors, which is representative of the coalition’s membership. This follows the announcement that Peter Keller, Executive Vice President of Tote Inc., will chair the coalition.

The board of directors is responsible for the strategic development and oversight of SEA\LNG’s vision, mission, objectives and activities, directed towards the accelerated use of liquefied natural gas (LNG) as a marine fuel. It will play a critical role in representing the membership in key decision making, as well as promoting SEA\LNG initiatives.

The SEA/LNG board of directors is:

Encouraging a coordinated value chain approach, Peter Keller, chairman of SEA\LNG said: “To fully realise the potential of LNG as a marine fuel, it is vital that we work together, across the LNG value chain. No one organisation can advance this agenda alone. Our newly constituted board of directors reflects the diversity of our membership and the scale of the opportunity that lies ahead of us.”

Earlier this month, the coalition issued a position statement offering its support for the implementation of MARPOL Annex VI for the prevention of air pollution by ships.

Reflecting on the coalition’s position, Keller said: “Independent of the timing of the IMO’s implementation of the 0.5% global sulphur cap, today LNG is already a clean, safe, practical and economically viable fuel for the shipping industry. The industry is making big steps in creating the infrastructure to enable quick, safe and cost effective LNG bunkering in key global ports; diminishing the price premium for LNG-fuelled vessels; as well as working with regulators to establish consistent international and national regulations, which we believe will enhance investment in this sector.”

SEA\LNG brings together key players from across the supply chain, including shipping companies, classification societies, ports, major LNG suppliers, downstream companies, infrastructure providers and OEMs (original equipment manufacturers) to address market barriers and transform the use of LNG as a marine fuel.

SEA\LNG is guided by a board, which is led by chairman Peter Keller. Each member organisation commits mutually agreed human resources, data analysis and knowledge sharing in support of SEA\LNG initiatives and activities and financially contributes via a membership fee.

The SEA\LNG coalition was established by Xyntéo, an advisory body which works with global companies to identify and implement collaborative initiatives that enable businesses to grow in a new way, fit for the resource, climate and demographic realities of the 21st century.