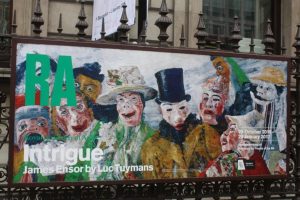 Master of caricature and satire, James Ensor is the subject of the new exhibition at London’s Royal Academy. The show is a triumph in its focus on the highly original perspectives that Ensor drew from the manners and morals of his time. It will help to ensure that he is recognised as one of the greats of the modern era.

James Ensor was born in 1860 in Ostend, the Belgian port and seaside resort, and lived there almost all his life. Ensor loved Ostend for its crowds, its coastline, the light playing on the capricious North Sea, and the gaudy carnivals that enlivened the streets of the place and neighbouring towns each year.

The exhibition is entitled Intrigue: James Ensor by Luc Tuymans, a trove of 70 paintings, drawings and prints, most of which are on loan from Belgian collections. Intriguing it is. It is titled after one of Ensor’s most important paintings, The Intrigue from 1890. The exhibition is curated by the contemporary painter Luc Tuymans, according to whom The Intrigue (1890, from the (Royal Museum of Fine Arts, Antwerp) is arguably one of Ensor’s greatest works. The painting depicts a supposed scene from the Shrove Tuesday carnival when traditionally groups of masked men and women partied from café to café, inveigling the customers into their intrigues. In The Intrigue a newly-wed couple, both masked themselves, is surrounded by sinister, boisterous masked figures

Luc Tuymans considers that Ensor was a truly avant garde artist: after one has looked into the range and variety of his work, “then Picasso can go home.” 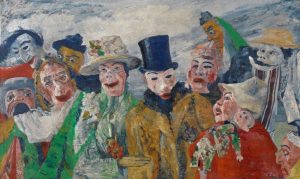 This is the first major exhibition in the UK for 20 years of the work of James Ensor, who was at his artistic peak in his mid-30s. Although suffering much ill health, he lived to the age of 89. Some of the pieces are exhibited in this country for the first time. Several are remarkable for their finely drawn figures, the whole pulsing with impact as in the oil on canvas The Entry of Christ into Brussels in 1889 from J Paul Getty Museum, Los Angeles; and a copper plate etching with the same title of 1895, held by Groeninge Museum Bruges. His satire can be bold and withering – see Plague here, Plague there, Plague everywhere, an 1888 study in black, blue and red chalk and graphite on paper, loaned by the Royal Museum for Fine Arts, Antwerp. 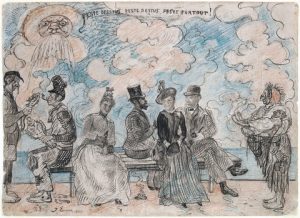 His subjects swung from the traditional to the religious to the fantastic, and most were related to Ostend which was his inexhaustible source of inspiration, and to the nearby countryside. Even his furthest imaginary schema can be traced to the social turbulence of his native country.

As he grew up, Ostend was undergoing rapid change, from an important fishing town to a fashionable health resort, favoured by royalty and known as “the Queen of Belgian beaches.” There were ferry crossings from Dover bringing an influx of English tourists, at least in the summer, although the winter months were bleak. Ensor mainly reflected the outdoor moods of mid-year, outward-looking and bright, and caustically treated social issues, as in The Bad Doctors and The Massacre of Ostend Fishermen.

The highly individual and visionary work of James Ensor is impossible to categorise, but many consider him to be an important precursor of Expressionism, which became particularly strong in pre-Hitler Germany.

Some see in his work shades of the apocalyptic and fabled images of the Dutch painter Hieronymus Bosch (about 1450-1516), to others it calls to mind the provocative English artists Jake and Dinos Chapman, the brothers Iakovos and Konstantinos Chapman who have Greek Cypriot heritage on their mother’s side.
Son of an English father and a Belgian mother, Ensor was fascinated by the curio shop run by his family where he saw “an inextricable jumble of assorted objects constantly being knocked over by a number of cats, deafening parrots, and a monkey…” This exuberant environment was one of the mainsprings of his imagery. Other sources of his creativity were carnival time and the objects dug up as foundations were developed for new construction in the city. This mélange of masks, theatrical costumes, skulls and skeletons feeds his wild imagination. Ensor wrote: “The mask means to me: freshness of colour, extravagant decorations, wild generous gestures, strident expressions, exquisite turbulence.”

Through his paintings, he could play with the malleable forms of masks, their bright colours, and shocking and scary impact. In his still life compositions, he used masks for their theatrical imputation.
Skeletons unearthed from mass graves as the city’s construction boom proceeded were the bones of victims of the siege of Ostend (1601-04) during the Eighty Years’ War against Spanish domination. In his studio Ensor dressed up the skeletons and gave them living roles in colourful, enigmatic tableaux on canvas.

Ensor was ever independent-minded. When he studied at the Académie Royale des Beaux-Arts in Brussels he rebelled against traditional teachings and frequented the avant-garde salons of artists and intellectuals. The spirit of free expression remained with him when he returned to Ostend in 1880 to remain for the rest of his life. In 1883 after one of his paintings was rejected by the Antwerp Salon he was a founder member of the progressive artist group Les Vingt (Les XX), in which he was introduced to symbolism – the expression of mystical ideas – although he broke away from the movement to pursue his individual style, and especially further its sardonic element.

Among memorable exhibits are The Skate of 1892 (from the Royal Museum of Fine Arts, Brussels) which is an enigmatic still life, and Self-portrait with Flowered Hat of 1883 (Mu.Zee, Ostend), a humorous reference to the Peter Paul Rubens Portrait of Susanna Lunden in the National Gallery, London. A fine selection of Ensor drawings is clearly displayed in a special cabinet.

Creating a kind of period mood, the first thing we see as we enter the exhibition is a charming short film entitled James Ensor in Oostende ca. 1920, made by the installation artist Guillaume Bijl in 2002. This is not what the title says it is. It purports to show the painter by the sea at Ostend with his friends in belle époque dress taking a drink, strolling in the arcades of the Thermae Palace and relaxing in bathing costumes on the beach. It is a modern re-creation in jerky black and white with imitated scratches on the projection, giving the impression of a roll of film salvaged from the days of silent movies. In fact the lushly-bearded Ensor is played by a local antique dealer..

Ensor’s works are accompanied by a selection of Gilles de Binche carnival masks. The carnival of the town of Binche has been declared by Unesco a Masterpiece of the Oral and Intangible Heritage of Humanity. The Gilles are fantastically-dressed characters who during carnival “ward off evil spirits” with their sticks. The Royal Academy exhibition includes a ghostly oil painting by Luc Tuymans from 2004, Gilles de Binche.
All this is complimented by two works on paper by the Belgian Symbolist painter Léon Spilliaert, 20 years younger than Ensor, but similarly associated strongly with Ostend.

The exhibition is organised by the Royal Academy of Arts in association with the Royal Museum of Fine Arts, Antwerp, which has the largest collection of Ensor works, starting with purchases in 1921. It is curated by Luc Tuymans in collaboration with Adrian Locke, senior curator at the Royal Academy. Mr Locke described Ensor as an artist with a lot of self-belief who worked hard at maintaining his integrity in a world where he was sometimes ridiculed.

The exhibition, sponsored by the Government of Flanders, is at the Sackler Wing of Galleries, Royal Academy, from October29 2016 to January 29 2017 10am – 6pm, Fridays until 10pm.