The second Glaziers’ Art Fair on October 25 and 26 2016 in London was yet another stepping stone for artists such as Sarah Stanley, who specialises in mosaics, jewellery and small outdoor sculptural works – and stepping stones.

Sarah, who already has substantial achievements in the craft, was one of more than 60 exhibitors showcasing their work at the historic Glaziers Hall, the only livery hall south of the Thames (it is close to London Bridge and Borough Market). The spacious hall is the home of the Worshipful Company of Glaziers and Painters of Glass.

The fair is a showcase for display and sale of glass art and related media and conservation, and its second edition attracted 10 more craftspeople than did the first.

Every stall had much in original design and concept to offer, and Sarah for instance was showing a wide range of contemporary-styled mosaics made especially for the fair, mainly of glass playing with complementary combinations from the colour spectrum. 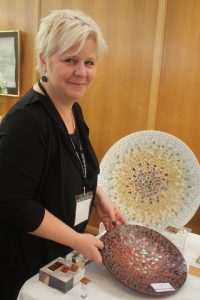 Mosaics of many colours.

“I seek to make things practical as well as decorative,” she says. They are either suited for interior or exterior (stepping stones and water features, for example) display, but sometimes for both.

On her display stand were hand-cut platters crafted purely from glass in hues such as white gold and ruby red, fixed on bamboo or metal so that they can adorn household gardens including fences and walls: these and display orbs are in robust materials while still looking elegant, and some are even frost-proof. Sarah noted that the dishes placed outdoors in one garden she knows came through the rather wet British summer of 2016 untarnished, even though they had been filled with soggy leaves for some weeks.

Some large receptacles can be used as table centres with metal floating candles, the glass setting lending a warm glow to the surroundings. Some items have versatile uses: wall-piece or teapot stand, say. All very much in the contemporary mode, but whatever she fashions – glass, ceramics, porcelain, stone and marble – she treats with traditional techniques 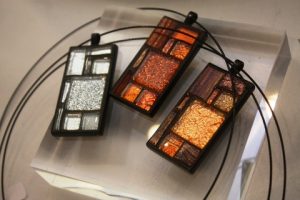 Most recently, Sarah has been developing in glassware what some call “statement” rings, and earrings – “large enough to be seen but small enough to not weigh too much,” she smiles..

She has had a busy summer, working for private clients, teaching adult classes and workshops, and showing at gardens and exhibitions in the southeast.

A short while ago, she delivered her first collection of jewellery for sale at Waterperry Gardens, near Oxford. Waterperry was made famous by Beatrix Havergal who established a School of Horticulture for Ladies there from 1932 to 1971, and has eight acres of landscaped ornamental gardens and other visitor attractions.  Liz Tagart, manager of the gallery there, invited Sarah to offer her wares after seeing her work at a show earlier in the yea. The gallery is housed in a restored 18th century barn and specialises in British contemporary art and craft. 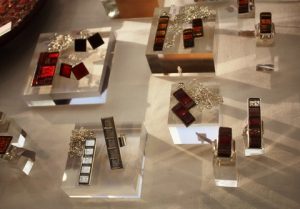 Making a statement with fine jewellery.

The collection for Waterperry Gardens includes 20 pieces of individually-designed, hand-made mosaic pendants and earrings on silver-plated, nickel-free bases with chains in tones of silver, gold, copper, turquoise and blue.

During the summer, some of Sarah’s creations were on display at Syon House, the 16th century west London house and grounds noted for the work of Capability Brown and Robert Adam, and in September she was one of 100 exhibitors in the first Borough of Ealing Art Trail. The art trail is a type of event increasingly popular in London: artists open their homes and studios to visitors on a couple of weekends. “The advantage is that people can see the work in context, how it can be in the garden or home,” says Sarah. 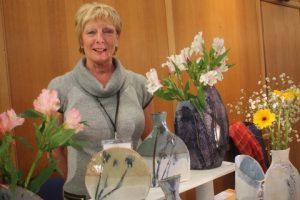 With a fellow artist, Dianne Preston who specialises in papier-mâché work, Sarah showed works from April to September at Chilstone Gardens in Kent. Based near Tunbridge Wells, Chilstone promotes handmade garden ornaments and architectural stonework. At the 2016 Chelsea Flower Show, Chilstone’s Meningitis Now Futures Garden won the Royal Horticultural Society People’s Choice award for artisan gardens and the Silver-Gilt RHS Medal. Sarah and Dianne will be back at Chilstone in 2017.

Panels from Roots of Knowledge.

A professional member of the British Association for Modern Mosaic, Sarah is based full time at her studio on Johnsons Island at Brentford, west London, a spot which has an important place in the history of waterways trade in England. The tiny island originally formed part of Isambard Brunel’s Brentford Dock, and housed the office of the station master and lock keeper.
Johnsons Island lies next to the first lock linking the Thames to the Grand Union Canal and is joined to “the mainland” by a small footbridge behind the Brewery Tap pub on Catherine Wheel Road. It is now home to 16 studios including those of Sarah Stanley and Dianne Preston and a small gallery. According to the website www.johnsonsislandartists.com “it is a magical, creative space – where history, art and nature are woven together, as Samuel Pepys would agree when he sailed past for an illicit assignation with the Brentford lady in 1660.”

Among her many commitments, Sarah is a founder member of Johnsons Island Artists and the Made In Ealing exhibiting group. Johnsons Island open studio exhibitions are twice a year, with the next being November 25-27 2016.

Present at the Glaziers Hall at a neighbouring table was Barbara Jorgensen, who drew admiring comments for her ultra-slim vases ideal to hold just a few stems or even dried grass – a feature which makes flower arrangement easy for anyone. In this way, the handmade stoneware ceramics are both functional and decorative. 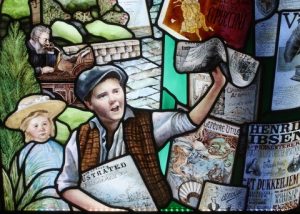 Learn all about it: panel detail from Roots of Knowledge.

Added beauty for Barbara’s vases is endowed during the oxide preparation, as grass or cow parsley is pressed into the sides to pick out a natural design, the process giving every piece an individuality. Of the technique, “the simplicity is, it just does its own thing,” says Barbara modestly. “You can make them [the vases] into something quite exotic with very little.”

A stunning feature at the Glaziers’ Art Fair was the only showing outside the US of part of Roots of Knowledge, a 12-year work consisting of 60,000 pieces of stained glass. From Utah in the western US, 13 of the 80 individual stained glass windowpanes were air-freighted to London.

In its entirety, Roots of Knowledge is 10 ft high and 200 ft long. It is a collaboration between Utah Valley University and Holdman Studios, and chronicles by means of coloured glass paintings the long quest throughout history for intellectual and social progress. It includes such episodes as the development of the Mayan calendar, Egyptian construction techniques, and the contributions of Greek philosophers, through to more modern developments such as the American civil rights movement. For one panel alone, which the project directors call the Alexander and Bucephalus mosaic, more than 2,400 pieces of glass were used.  The glass was sourced mainly through a US distributor from several countries, including some in Europe. 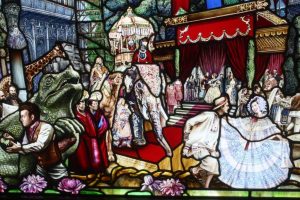 The project came from an approach by the Utah glass artists Tom Holdman and Cameron Oscarson to Utah Valley University president Matthew Holland, who granted his support on condition that they “make it bigger” than they had suggested.

Official unveiling of Roots of Knowledge will be on November 18 as part of the university’s 75th anniversary celebrations. Besides glass, the work contains rock, fossils, coins, meteorite, petrified wood and coral. More than 100 people had major involvement in the project, and in all 300 contributed in various ways.

The Worshipful Company of Glaziers and Painters of Glass a history of nearly 800 years. Its charity, the Glaziers’ Foundation, gives grants for the conservation of stained glass windows and rescues glass from deconsecrated churches and other buildings with a view to giving it a new lease of life elsewhere. It helps to develop the careers of stained glass artists and conservators through competitions and awards. Its website says that it “offers excellent networking opportunities across a number of professions and plays a full part in the civic life of the City of London.”