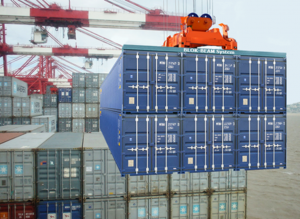 A revolutionary new container handling system, aimed at easing the increasing problem of port congestion, is being launched at a technical demonstration in Shanghai at the end of November.

BLOK-BEAM comprises a pair of steel beams connecting the six empty containers together to form a single block, which can be lifted as one unit. While containers have remained relatively small and standard in size over the past few decades, container cranes have increased their capacity significantly, permitting increased loads to be handled.

According to John Evans, Managing Director of BLOK-BEAM Ltd: “Now that ships are able to deliver around 20,000 20ft containers on one vessel – and the cranes to service them can lift up to 100 tonnes at a time – it is the ports which, in spite of their improved efficiency, have become the focus of attention in ship-to-shore movement.”

Evans notes that ports handle over 500 million containers annually, of which as many as 25% are empty. With container terminals charging up to US$300 per lift, the potential savings to the industry are massive.  Instead of extended dwell-times in port while extensive loading and discharge takes place, the ships could be at sea – or saving fuel by slower sailing.

Evans continues: “We estimate that if only one-third of empty moves of containers are handled by BLOK-BEAM, the industry would save over US$2 billion per year – before even considering the vast expense of idle time, fuel savings, general efficiency, losses at sea and safety.

Safety is indeed a big issue at sea, on deck, and on the quayside.  Individual containers can be linked for lifting as a tandem vertical lift.  But being so high, they risk being unstable and can topple over on quayside or deck. At the recent ICHCA Ship-Port Interface Seminar in London, one presentation indicated that even worse can happen at sea – where the stacks can go up to 10 high and many hundreds of containers are lost overboard each year.

For the ports to further enhance productivity, BLOK-BEAM Ltd has designed a special trailer, – the “OX” – which acts as a jig for BLOK assembly and then as a trailer for transporting the BLOK, neatly and quickly, to the cranes for loading. Preparing the OX is done away from the quayside, so that the stevedores can work regular hours in safety preparing the container “BLOKs” ready for the arrival of the ship.   The jigging features of the OX enable the containers to be neatly positioned, whilst they are secured as a BLOK.

Martin Clive-Smith, BLOK-BEAM Ltd’s Engineering Director, quantified the improvements in safety offered by the system, as follows: “By moving 80% of container preparations off the busy quayside, the risk of accidents is reduced, while time is saved. Likewise, the BLOK-BEAM System has the potential to cut on-deck lashing by more than 50% and yet increase stability at sea.”

During unloading, cranes can drop the BLOKs straight onto the OX and just one driver can rapidly move the containers away from the busy quayside 6 times faster than normal.  Because the BLOK is 3 containers wide, it is entirely stable and cannot be knocked over.

The BLOK-BEAM will be formally launched at the QSOE factory (manufacturers of the system), near Shanghai on 28 November 2016.