The BDI  (Baltic Dry Index) fell earlier on today 19 points at 838 given the Capers, on …reflection fall of 91 points… the geopolitics too are about to bring the world down; John Faraclas daily briefing:

The Capers come down yet again following yesterday’s plus of 117 points and now these 91 points lost today make it really difficult for the market to stabilise! At 1,443 , below the 1,500 points pause only danger… Capers are now synonymous with volatility!

The Panamaxes lost ten points and now the BPI reads 895,  below the 900 point psychological level –  the one which could easily see the 1,000 point barrier conquered…

Hooray hooray the Handies’ BHSI gained one point now at 436.

The Wets also on a falling modus; the last published BDTI (Dirties) and BCTI (Cleans) lost four and six points respectively now standing at 656 and 417…

The Boxships are eagerly waiting the …take off and others the …take over! Still tough times ahead.

There are about US$ 15 (fifteen) billion of red loans confirmed as you read these lines, a bubble ready to burst any time… What’s the remedy? Who can take over these liabilities? AND there are more to come, as there are two schools of thought: either War or everybody will go under and for sure War will erupt; fancy that eh?

Chinese and Korean Shipyards are in a mess; a few Japanese though make sense… Caution!

On the Geopolitical front things couldn’t be worse; read yesterday’s report as well as that of last Friday and you will see what we mean. The very issues we mention, MIGRANTS, Syrian saga BREXIT, Turkey, Greece, the European Union, Iraq, ISIS, the USA’s messy presidential election, the War against any type of terrorism and lately piracy resurging, are still on, so be ultra-vigilant.

We look forward to the forthcoming World Travel Market week beginning on Monday the 7th at London’s ExCel centre were we shall evaluate the Maritime Tourism and other issues.

Capital Link tomorrow in London with the exceptional 6th CSR in Shipping & Offshore event and Navigator’s 14th Annual Conference in Athens will monopolise the day. At least there is the IMIF’s 41st Anniversary in central London were its iconic Life President Jim Davis and the members of the Council are staging their Annual Dinner – besides being an honour for one of Planet Ocean’s  best shipping personality, it is a time to reflect and network too! 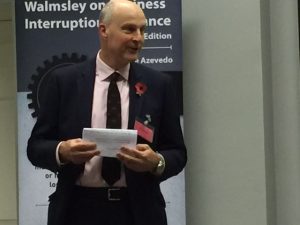 Earlier on tonight we attended an interesting book launch reception at the Baltic; Celzo de Azevedo from Thomas Cooper, presented a brief slides spectacular on “Walmsley on Business Interruption”, 2nd edition by Witherby Seamanship International. Prefaced by a brief discussion on the impact of the new Insurance Act 2105, the author was very clear and left no chance for any question from the 50-strong audience. The event was introduced by the very eloquent Tom Moisley, partner at Thomas Cooper. A nice drinks and dips reception followed and it was good to witness and participate in an excellent networking. 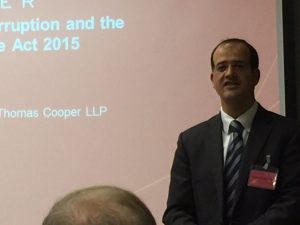 Spotted David Hebden, Captain Mike Meade from M3, Mark Steibel, John Treasure from Credit Agricole, David Price from Advanta Global Services, David Mathias from Mchavens Global Claims Services, Warren Heydock from Pool Re Insurance. Carrie Pairman from the publisher was there too and many purchased the book offered at a special introductory price. There were also members form the various divisions of Thomas Cooper. Good organisation skills by Yollanda Alie and her team – Nicola Porter and Dominic Parker. We will revert with a review soon.

Have a nice evening and be on guard for every eventuality where ever you are, tonight, tomorrow and every day until things calm down…!