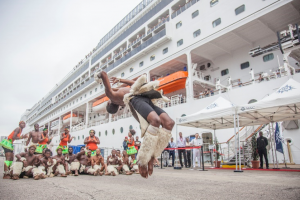 MSC Simfonia was welcomed to Durban by marimba bands and traditional dancers.

[Durban, South Africa, 1 November 2016]  The South African 2016/17 cruise season kicked off this morning with the arrival of the first international cruise liner, MSC SINFONIA, at the Port of Durban.

Carrying a full capacity of 2600 European and South African passengers, the vessel arrived from Venice in Italy and was greeted by the traditional welcome including a tug water spraying drill, as well as marimba bands and traditional dancers. 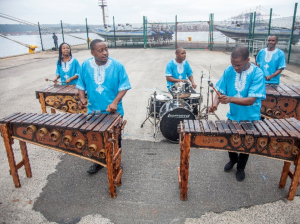 Transnet National Ports Authority’s Port Manager for the Port of Durban, Moshe Motlohi, said MSC Cruises is one of 14 cruise line operators serving South Africa this season, while MSC SINFONIA is among at least 20 international cruise liners that will call at six of South Africa’s eight commercial ports during this season. The Port of Durban will welcome seven of these vessels.  He said the Durban cruise market had grown from 81 800 passengers ten years ago to nearly 145 000 passengers last season.

“I would like to thank MSC Cruises for their ardent support of our cruise tourism sector, by returning to South Africa each year and using the Port of Durban as a home port for MSC SINFONIA,” he added. 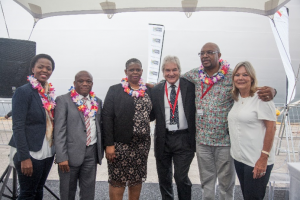 He said TNPA is striving to work more closely with municipalities, provinces and the tourism sector to ensure alignment between goals and planning to cater for the fast growing market.

“TNPA’s position in terms of its cruise strategy is to offer new and modern cruise terminals that will provide an ideal gateway to a unique South African experience,” said Motlohi. He said investments were being made to boost the sector, including development of a new passenger terminal in the Port of Durban and upgrades at the Port of Cape Town’s existing passenger terminal.

MSC Cruises Marketing Director, Alan Foggitt, said the cruise company would be replacing MSC SINFONIA in the 2018/19 season with the larger MSC MUSICA. MSC had also secured a new destination in Northern Mozambique to include in its regional cruise schedule.

Her Worship the Mayor, Councillor Gumede, expressed her excitement at the prospect of developing Durban into a world-class cruise capital with facilities that met international standards and exposing visitors to the array of tourism experiences Kwa-Zulu Natal had on offer.

KwaZulu-Natal MEC for Economic Development, Sihle Zikalala, said: “The cruise business in Durban is estimated to contribute to around 2 700 employment opportunities in the tourism sector – with the direct spend running into millions according to 2013 figures. This is regarded as a growing business with an expected number of passengers gracing our shores hitting the one million figure by 2025. KwaZulu-Natal wants to grab an even bigger slice of this projected market and this would hinge on our continued investment in the improvement of our maritime infrastructure, skills development and extensive marketing of the province as the destination of choice for sea-travellers.”  He shared his wish that South Africa would one day run her own cruise line from Durban, with a vessel built in this country, serviced by local suppliers and employing local people. 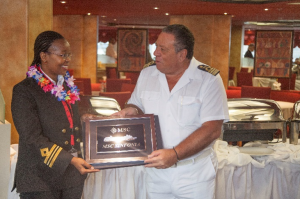 Boasting 980 cabins and newly revamped facilities, the slightly longer MSC SINFONIA has been accommodated at the Point and Leisure Precinct’s longer M-berth since last season after her recent multi-million Euro revamp which increased her length by 24 metres.

Vessels other than MSC SINFONIA continue to use the port’s N-Shed, which was upgraded ahead of the 2015/16 cruise season in a joint exercise between TNPA and MSC Cruises.

The Port of Durban is set to announce the preferred bidder for development of a new passenger terminal in the port by the end of April 2017. 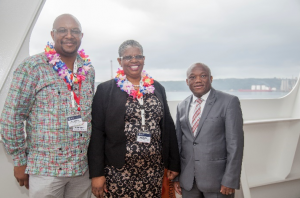 Other luxury cruise liners sailing to the Port of Durban this season include Regent Seven Sea Cruises with SEVEN SEAS NAVIGATOR and VOYAGER, Oceania Cruises with its vessels INSIGNIA and NAUTICA, Silversea Cruises with SILVER CLOUD and Compagnie du Ponant with its newly built MV LE LYRIAL.