Top Posts
Don’t take chances where your health is concerned…
GLOBAL & REGIONAL DAILY (Thursday 13 May, 2021)
RMT calls for action to protect seafarers’ mental...
Poseidonion Grand Hotel welcomes you back on May...
Large Diameter Drilling to partner with DEME Offshore...
Cyprus Ship Management Round Table Webinar and Debate
Lady Moura up for sale… plus more
Will the dollar decline? The changing landscape of...
TSUNEISHI SHIPBUILDING collects actual operation data by IoS-OP
Deltamarin is proud to be a part of...
Damen launches RoPax 6716 for the Port Authority...
Home Associations The BDI@834 still poses a threat
AssociationsBankingContainersDry BulkcarriersEnergyEnvironmentEvents, Conferences,Forums and SymposiumsMarketsNewsReportsShipping IndicesStatisticsStock MarketsTankers

The BDI@834 still poses a threat

The BDI (Baltic Dry Index) closed  down earlier on today at 834 – four points down since yesterday; the geopolitics remain as explosive as ever; John Faraclas midweek report:

The Capers managed to “correct” the respective BCI 2014 with eight points plus – now reading 1,451;

The Panamaxes lost ten points and the BPI now stands at 885 points;

The Supras’ BSI lost three points and now reads 718, and

The Handies’ BHSI  was down two points since yesterday at  434!

All in all a falling dry market – one should avoid the figures, particularly those emanating from volatility, particularly from the Capers. Volatility is here to stay – expect more to come. CAUTION should be taken very seriously on account! Look for bankruptcies looming in the background and expect to read many ship-financial scandals!

We expect to hear more news on the Container market and we expect more surprises to come! We will not though be surprised!

The Wets with more than mixed feelings; the last published BDTI (Dirties) and the BCTI (Cleans) stood at 655 – one and 505 – plus 88(eighty-eight) points respectively. We haven’t seen such plus points for a …while now. We shall see….

The price of WTI was US$ 45.90 – falling… CAUTION as these fallings or even ups determine more of a crisis to be expected. The energy jargon hits back?

Expect spectacular shipping news from all sectors given the market’s deteriorating conditions. We still maintain though the fact that this is the best ever buyers’ market. We truly wish good luck to those who can go ahead and buy or contract new double eco ships of all types and sizes! We also assure you of many more troubles in the shipyards sector! Many fraud cases will also surface in the shipfinance sector

The Geopolitical front already in tatters with:

The MIGRANTS issue dominates the field… in all fronts: humane, political, geopolitical, religious, you name it! Don’t be surprised from the outcome and how same will strike us all!

The total destruction of Syria looks more than a fact – pity for the people, pity for the warring functions, pity for humanity which prefers the energy control from the well-being of Planet Ocean’s populations…

Awaiting for the complete fall of Mosul and the eventual crashing of ISIS!

Turkey’s Erdogan must come down to his senses; blackmailing the entire world is one thing, haunting your own Nemesis yet another!

BREXIT will create the biggest problem worldwide – still wonder where were the rules for the EXIT?

The European Union diving… is the end nigh yet?

The USA presidential election, no matter who the winner is, poses a big question: Who is fit to run and who is fit to deliver as promises make debts and debts make promises. With less than a week to go and despite the pools results, despite many already cast their vote, the game might surprise us all, but logic leads to Hillary Clinton’s win. What’s Putin’s involvement?

China’s finances must be scrutinised so we all know, particularly in shipping, were we stand…

Terrorism and Piracy are on the rise. Be on guard. Don’t leave things unchecked. It is not just the authorities’ caution and advise, it is more than that!

We don’t need to carry on: the World is on fire…

We were more than fortunate to participate all day at One Moorgate, in the heart of the Square Mile, at the 6th London Capital Link’s Shipping and Offshore Forum; it was more than a success! On all counts and as declared by those wondering of its need and success five years ago, the event not only attracted the interest of the international community, not only covered so many important issues, it set the ground for expanding same and offer it to more shipping capitals for all stakeholders to be able to participate, gain from the themes and speakers and lead us to operational excellence.  We also witnessed one of the best ever networking happenings!  It was also good to see so many friends from the past! We will revert with a full report. Meantime you can watch the live interview- video taken by Iris Liaskoni,  given exclusively to ALLABOUTSHIPPING by Nicolas Bornozis: 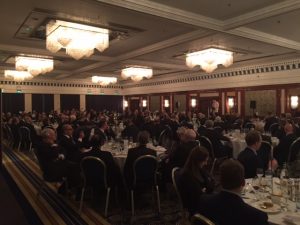 The day ended with IMIF’s 41st Anniversary Dinner at Radisson Blue Portman Hotel, a great event to be, hard luck for its Life President Jim Davis and current one Harry Theochari to miss it, but it went well! We hope next year to have both of them, but the other members of the council performed their duties to the utmost! IMIF (The International Maritime Industries Forum) is the Shipping Industry’s unique force! The 250 strong faithful, members, guest and their friends created a great atmosphere with discussions continuing until the early hours – suspected… Soon you will read all that took place with exceptional pictures too!

Have a good rest and be on guard from Pirates and Terrorists – this is a repeat as we mentioned same in para eight above!