National and international authorities should be pressed to take a unified approach to governance of remotely-controlled oceangoing ships, the 2016 conference of the International Union of Marine Insurance was told.

Robert Veal, a barrister and Research Fellow at the Institute of Maritime Law, Southampton University, said autonomous technology is here today, and the challenge was to develop the right practices in unmanned operations.

He gave comfort to advocates of the looming transport revolution by saying that such vessels were covered by much of the existing regulatory framework, while conceding that there were difficulties with autonomous operation. Modest amendments would be required to make remote controlled operation legal.

His conclusions came against a background of forecasts by technology experts that crewless operation can be achieved by the end of the decade.

There is much excitement in some quarters over the claimed efficiency gains of fully automated ships that will be operated via supercomputers from shore. Other experts warn of the huge costs needed to create and build a new generation of crewless ships, and that ironically they may call for considerable manpower in their reconfigured production and guidance. 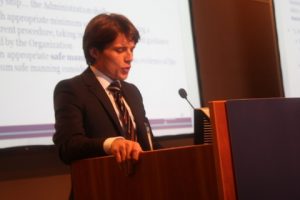 Mr Veal listed a series of important conventions and laws against which the proposed operation of unmanned vessels would be tested: the UN Law of the Sea Convention (Unclos) 1982; the Convention on the Safety of Life at Sea (Solas) 1974; Standards of Training, Certification and Watchkeeping; Marpol; International Regulations to Prevent Collisions at Sea (Colregs) 1972; Salvage Convention 1989; Limitation of Liability for Maritime Claims Convention 1976; Nairobi Wreck Removal Convention;  International Convention on Civil Liability for Oil Pollution Damage;  and domestic legislation such as the UK’s Merchant Shipping Act 1995.

Existing regulations were generally applicable to ‘ships’ and this posed the question whether an unmanned craft could be termed a ship. “Can there be a ‘ship’ without seafarers? Seemingly, yes,” said Mr Veal, citing the Merchant Shipping Act 1995 (England and Wales), Code des Transports (France), Burgerlijk Wetboek (Netherlands); and the US Code – Rules of Construction Act).

Mr Veal turned to the quandary over official requirements for crewing.

Article 94 of the Unclos requires that “each ship [must be] in the charge of a master …who possesses appropriate qualifications, in particular in seamanship, navigation, communications and marine engineering…”  Could this be the remote controller or pre-programmer of an unmanned ship? The definition of a master in the Merchant Shipping Act 1995 was “every person (except a pilot) having command or charge of a ship.”

Regulation 14 of Solas chapter five states that “contracting governments undertake each for its national ships to maintain/adopt measures to ensure that from the point of view of safety of life at sea, all ships shall be sufficiently and efficiently manned.” The chapter continues, insisting that “for every ship … the administration shall… establish appropriate minimum safe manning following a transparent procedure, [and] issue an appropriate safe manning document as evidence of the minimum safe manning considered necessary.”

The Solas regulation did not explicitly state that every ship must have at least one person on board. This posed something of a puzzle for the shipping community. If no people are on board, that ship falls foul of any requirement of manning adequacy, but “I do not think this itself prohibits unmanned ships.” Administrations will have to be absolutely convinced of the safety of operations, which is going to be an incredibly difficult task.

Under the Colregs, every vessel shall at all times maintain a proper lookout by sight as well as by hearing, as well as by all available appropriate means. “Does it require people?” was the question. It required human perception and judgment, but sophisticated technology could present a highly accurate picture of vessels in the vicinity.

“Does it require seafarers?  Were cameras and sound receptacles for shore streaming an adequate substitute? The rules do not really solve these problems. There is a fairly long maritime history of using both technological advancement and shoreside personnel in particular,” Mr Veal went on.

“It seems they require experienced seamen in real time: whether this can be provided remotely is a moot point.”

The question of remote control had to be an absolute priority for the industry to develop standards and certification requirements and to press national and international authorities for a unified regime. “Without that, insuring these applications is perhaps going to be insurmountably difficult. “Unmanned ships are on the immediate technology horizon. Many regulations will need to be clarified or amended.” Development of standards and practices would give maritime authorities the competence to certify safety.” Only then will unmanned ships be insurable.”

Frédéric Denèfle, chairman of the IUMI legal and liability committee, commended Mr Veal for the detail of his analysis and said: “We will have to follow up closely these subjects.”

The BDI@834 still poses a threat