What the 2016 York-Antwerp Rules means for insurers

What the 2016 York-Antwerp Rules means  for insurers

Casualty costs could be noticeably reduced in the near term under the newly agreed York-Antwerp Rules 2016, the annual conference of the International Union of Marine Insurance heard in Genoa in September.

While the revised rules, the product of 20 years of negotiations, could trim the liabilities of insurers, delegates were warned against over-optimism about the effect of the changes.

Caution was voiced by Ben Browne, who represents IUMI on the General Average Guidelines standing committee of the Comité Maritime International, comprising national and international maritime law associations. The CMI remit is to contribute to the unification of maritime law.

Mr Browne, a partner at law firm Thomas Cooper LLP and a specialist in the topic for many years, presented a notional example of a casualty which under the widely-used 1994 York-Antwerp Rules might produce a total cost of $3.2m. Readjusted under the 2016 formula, the cost would be some $2.7m. The saving of $491,000 stemmed from of the reduction of interest and adjusters’ fees and the exclusion of commission.

The London lawyer said that the gains embodied in the 2016 agreement were a modest improvement on the 1994 rules, but he was anxious not to exaggerate them.

IUMI had relatively little bargaining power in this context. The 2016 result was an improvement on the 1994 and 1974 rule sets “and are the best insurers will get.”

A substantial rise in commercial bank interest rates could nullify the gains. He underscored that shipowners, who are firmly against significant reductions in the scope of General Average, control which set of rules are incorporated into their contract of carriage.

The insurers’ body has long argued that the York-Antwerp Rules greatly increase the cost of handling casualties. The2004 version of the Rules was a compromise that could have reduced the cost of adjusting casualties by between 13% and 17%, but was seldom used.

IUMI had set out to reduce the extra cost of casualties caused by General Average, speed up the adjustment process which can take years, and secure rules which would be acceptable to shipowners.  (The origins of General Average are said to lie in ancient Greece. General Average in modern days refers to the apportionment, between representatives of a ship, cargo and other interests, of extraordinary and voluntary sacrifice or expenditure made to preserve property in a marine casualty).

The CMI in 2012 established an international working group to review the rules from scratch, and adopted the latest edition and guidelines in May 2016. BIMCO has approved this initiative for incorporation into standard contracts of carriage, and all future standard form agreements, although “in practice it is unlikely that we are going to come across any 2016 contracts any time soon,” said Mr Browne.

Mr Browne criticised the “very time-consuming and costly process” set out in the 1994 and 2004 rules over the deduction of extra charges to arrive at a General Average contributory value.  Lloyd’s Open Form salvage payments are deducted from the property value to ensure that property interests do not pay more than 100% of its arrived value in salvage and General Average payments combined.

He asked: “How can contributory values be fairly assessed quickly and at least cost while preventing any realistic prospect that underwriters might have to pay more than 100% of insured values in salvage and General Average payments?”

A new rule provides that where salvage is not re-apportioned in General Average, salvage contributions will be deducted from the contributory value, but not the costs of defending the salvage claim, which he said usually takes a significant time to collect. Low value cargo may be excluded from contributing if the adjuster considers the cost exceeds the contribution.

Meanwhile, the 1994 version allows in General Average the wages and maintenance of the master, officers and crew while the vessel is detained at a place of refuge. The 2004 set excluded this allowance, and the 2016 edition restores the 1994 position.

On the cost of temporary repairs of accidental damage at a port of refuge, the 2016 position reverts to the wording of 1994 which occasionally gives hull insurers a windfall profit at the expense of cargo insurers.  IUMI favoured the 2004 stipulation where recovery in General Average is limited to the amount by which the estimated cost of the permanent repairs at the port exceeds the sum of the temporary repairs plus the permanent repairs carried out; or, if none, the depreciation in value of the vessel.

The 2016 provision does away with a commission set down in the 1994 rules of 2% on disbursements except crew wages and maintenance and fuel and stores not replaced during the voyage. This decision confirmed the 2004 position.

In the 1974 and 1994 editions, interest is allowed at 7% on General Average disbursements, sacrifices and allowances. Under the 2004 terms the interest rate is fixed annually by the CMI Assembly “based upon a reasonable estimate of … the rate of interest charged by a first class commercial bank to a shipowner of good credit rating,” and 2016 followed up on this.

Between January 2005 and December 2016 the average rate of interest on disbursements, sacrifices and allowances has been 3.8636% and the current rate (in mid-September 2016) was 2.5%. York-Antwerp 2016 calculates interest at ICE Libor (a benchmark rate for five currencies) on the first banking day of each year in the currency of the adjustment plus 4% (producing a total rate of 5.17% for 2016). The new interest rate will rise and fall with ICE Libor so could exceed the 7% allowable under the 1994 terms, said Mr Browne. 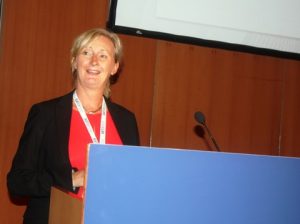 Helle Hammer, chair of the IUMI political forum, praised Mr Browne and others at IUMI for the progress achieved.  “Tremendous effort has gone into this,” she said.

In a separate presentation to IUMI, Richard Cornah, chairman of Richards Hogg Lindley, and a former chairman of the Association of Average Adjusters, said that the CMI guidelines did not form part of the York-Antwerp Rules and were not binding. They were not intended to override the provisions of the rules, the contracts of carriage or any governing jurisdictions.

Mr Cornah pointed out that in the majority of jurisdictions the findings of an average adjuster regarding amounts payable by the parties were not legally binding, as would be the case with an arbitration award.

In rare cases an adjustment might be enforced by the courts, but the majority of adjustments were accepted by the parties (subject to any Rule D defences) on the basis of the professional standing and expertise of the adjuster, a member of a profession that prided itself on its impartiality and independence. Rule D recognises that General Average exists irrespective of fault or breach of contract by any of the parties.

Markets and Geopolitics twists and turns…