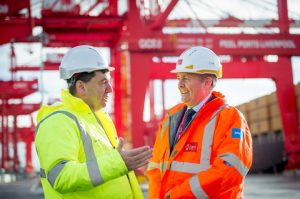 One of the world’s most modern shipping terminals, Liverpool2, is being officially opened today [Friday 4 November 2016] at the Port of Liverpool by the Secretary of State for International Trade, Rt Hon Dr Liam Fox MP.

The £400 million investment by Peel Ports, one of the UK’s biggest port operators, will provide a state-of-the-art ocean gateway for UK importers and exporters with road, rail and canal connections linking directly to the heart of the UK mainland, accessing a catchment of over 35 million people, almost 58% of the UK’s population.

The new deep water facility will complement the existing Royal Seaforth Container Terminal at the existing Port of Liverpool, with each terminal having capacity to handle around 1 million containers per annum. The Port is already the country’s biggest transatlantic port (45% market share) and the only major container port in the north or west of the UK.

Liverpool2, which is one of the UK’s largest private sector infrastructure projects, was developed in response to changing trading patterns and shipping industry trends towards the use of ‘mega’ ocean-going container ships. Liverpool2 will now be able to handle the biggest cargo vessels in the world.

Mark Whitworth, CEO of Peel Ports said: “Today marks the beginning of a new era for the Port of Liverpool. Our investment will help global shippers to transport cargo more efficiently to their end destination with lower costs, congestion and carbon emissions. Liverpool is in the right location, providing state-of-the art facilities and technology, and offers a real competitive advantage with a shorter supply chain and providing an all-water route right to the heart of the UK via the Manchester Ship Canal.

“Liverpool 2 will create a new trading gateway in the UK.  We are already exploring and succeeding in creating new opportunities for UK exporters, having recently signed asignificant Memorandum of Understanding (MOU) to create a strategic alliance aimed at facilitating international trade and generating new business by promoting trade routes between Liverpool and the west coast of South America via the Panama Canal.”

Secretary of State for International Trade Liam Fox said:  “Exporting is vital to the economic health of our nation. This investment at Liverpool2 will boost crucial cargo capacity, create local jobs and is yet another sign that the UK is open for business with the world.

“Liverpool is ideally located to increase our trade with countries west of the UK, including the US, Canada and South America, and this new port opens up even more opportunities with new markets and export destinations for UK businesses.”

Liverpool currently has around 8% of the container market in the UK. This figure would be expected to rise to between 15% and 20%.

Gary Hodgson, Chief Operating Officer of Peel Ports, added: “Being able to compete on the scale offered by Liverpool2 is only one aspect of how we’re transforming the port. Our real driving force is a commitment to customers, whether shipping lines or cargo owners, and helping them to achieve their business vision.

“As well as investing in the infrastructure and technology, we’re providing a more integrated service to our customers, whether that’s at the quayside, through port-centric logistics facilities or our wider network of ports.”

The occasion was marked with a major event for nearly 300 customers and stakeholders, featuring pyrotechnics during the opening ceremony and a performance by Alison Moyet.

The new expanded port facility will create an estimated 5,000 jobs direct and indirect jobs, stimulate further growth in the North-west and help to rebalance the UK economy.

The BDI: every plus point matters in this geopolitical chaos…