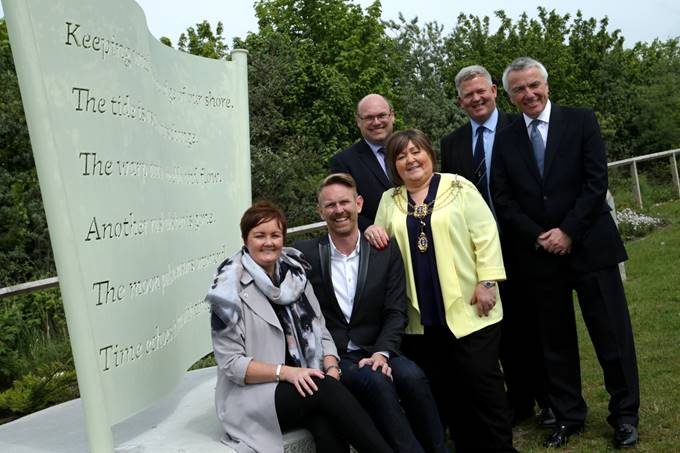 The award, which recognises schemes that enhance the built environment and re-energise historic architecture, was given to ABP and the students of Hull School of Art and Design, who worked with Hull City Council to develop a sculpture trail along the length of the path.

ABP commissioned artworks by local artists and art students to celebrate Hull’s maritime past, present and future in order to add points of interest along the length of the public right of way. The sculptures sit alongside murals designed by Victoria Dock Primary School and Andrew Marvell School, as well as information boards created by ABP and the Hull and Barnsley Railway Stock Fund.

The sculptures, murals and information boards were unveiled by ABP and the City Council at an event in May.

ABP Head of Projects Humber, Simon Brett collected the Good Mark award with the students responsible for the sculptures.

He said: “Re-routing the footpath was not a decision we took lightly and we knew we’d have to improve on what was there previously in order to provide a satisfactory solution for those who enjoyed using the old path.

“It was decided that we would install information panels and murals, that we would provide lighting and seating areas for people to watch the Siemens development take shape, and that we would also give local artists the opportunity to design installations that would enhance the visitor experience.

“We worked very closely with Hull City Council and Hull School of Art and Design over the course of a year to ensure the designs were right for the setting and the response we’ve had to them has been enormously gratifying – people really like them.

“We’re proud to have been recognised by the Civic Society for the work we’ve done and we’re very grateful to them for this award.”

Paul Priestley-Leach of Hull Civic Society said: “It would have been much easier to construct a path of a very basic standard, but instead we have a well landscaped route with lots of well-designed delightful detail, including sculptures by post-graduate students of Hull School of Art and Design. A thoroughly deserved Good Mark”.

The sculptures, which include a six-metre sheepshank knot, an illuminated wave featuring a specially commissioned poem and a miniature container, can be found on the pathway along the western, northern and eastern boundary of Alexandra Dock and can be accessed via Northern Gateway, Victoria Dock or Earle’s Road.