When criminalisation follows hard on the heels of marine accidents 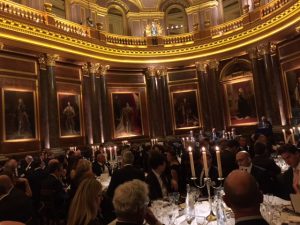 A panoramic view of the dinner hall

LSLC Cadwallader debate : When criminalisation follows hard on the heels of marine accidents

The incidence of criminalisation of shipmasters following accidents in United States waters has gathered momentum in recent years. According to maritime lawyer Michael Chalos, “it is an absolute truism that if you are involved in an accident which results in pollution or death, there will be a criminal investigation and, most likely, a criminal prosecution.”

Mr. Chalos, a partner at K&L Gates LLP (New York), had witnessed a steady erosion of the master’s authority in the US. One reason was “the extent of regulations, policies and procedures we have these days, not the least of which is the ISM Code.”

Another was the multinational composition of ships’ crews “who may not have the same respect for the master as homogenous crews. Seafarers could film and record any supposed shortcomings in equipment and operational practice and share in any fines subsequently levied by the authorities. Such whistle blowing was “really undermining both the master’s authority and the compliance efforts of the industry.”

Mr. Chalos was speaking to a packed audience at the London Shipping Law Centre’s Cadwallader debate at the Draper’s Hall, London on October 26th. 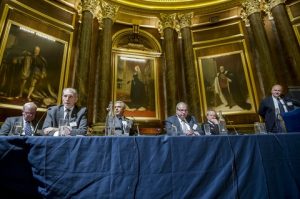 He had represented several masters in high visibility cases, including the Exxon Valdez. “When you have a spill of the magnitude of the Exxon Valdez in the pristine waters of Alaska, Government, the shipping industry and the press immediately became interested parties. Worst of all, politicians saw an opportunity to get their names and faces in front of the cameras. Although there was nothing intentional about what happened, these various interests ask who can they blame? The captain is in charge of the ship so blame the captain. They did.”

Prior to the Exxon Valdez case, there was very little criminalisation. Since then, a number of cases had involved spills and deaths. Having secured minimal convictions over the Exxon Valdez, the Government now charged captains under a welfare statute which did not require a mens rea element, just a simple negligence element. “They don’t have to prove any intent to commit a crime so these poor captains get convicted very easily. It is very hard to defend such cases.”

Lord Clarke believed “it would be difficult to think of a more important topic than the changing and challenging, or perhaps challenged, position of the master of a ship whose role is made ever more complicated and difficult by many circumstances, including instant communication, rough legislation and regulations, the requirements of charterers and other commercial interests and, of course, the courts.” 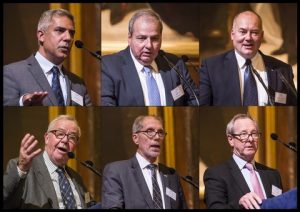 Captain Szymanski told his audience that InterManager’s focus on the ISM Code had led him to believe that the shipmaster was widely held in low esteem. “He is being grilled almost every month. Somebody comes onto the ship and proves to him that he is absolutely stupid, absolutely incompetent and should not be there.” Such a perception intensified InterManager’s role in defending masters who would also benefit from more support from their owners.”

Faz Peermohamed reflected on perceptions that the master was under attack, facing greater commercial pressures, carrying heavier legal burdens than before, experiencing bullying and subject to more interference by the authorities as manifest in criminal interpretation of his conduct in accidents. “Sadly, having been involved in many significant casualties, I have to tell you that that these perceptions are indeed the reality in many parts of the world.”

Masters were subject to commercial pressures from charterers and port authorities anxious to impose penalties for supposed shortcomings and from pilots seeking bribes. Bullying and micro-managing of masters’ activities were not uncommon and hindered effectiveness.

As well as mandatory Class and Flag State surveys, the master was subject to extra surveys from Port State Control, MOC, charterers and even cargo interests at the discharge port. “If the vessel is only in port for 12 hours after a three-hour pilot inwards with a three-hour pilot to get out, he hasn’t much time for his main duties,” continued Mr. Peermohamed. “These encompass dealing with agents, monitoring the progress of cargo, and signing paperwork and bills of lading. Yet there is only one master and each person who walks up the gangway wants his undivided attention.

“Masters need to be treated fairly.  When a casualty happens, every step the master takes is challenged, irrespective of right or wrong considerations. His or her actions are often misinterpreted by the authorities.”

However, cover was discretionary. Public policy demanded crew members involved in deliberate pollution and accompanying cover ups should not be supported. Nevertheless, Clubs would, by and large, provide Defence costs support for masters and crew after a serious collision with another vessel resulting in injuries or loss of life on either vessel, given uncertainties such as the attribution of negligence and the prospect of civil liabilities arising from wreck removal, cargo loss and collision damage.

“The Master and crew are often seen as the soft underbelly for putting pressure on an owner, and possibly his P&I insurer, to gain an advantage in a casualty situation,” continued Mr. Kelleher. “More and more crew members are being detained in jail or under house arrest whilst an investigation is being mounted.”

Although clubs were in no position to attack the perceived unfairness of local laws in jurisdictions worldwide, they could and did use their influence to facilitate fair treatment re individual casualties—-using their best legal and commercial resources locally, backed by industry associations.

Jeffrey Lantz reminded his audience that SOLAS, SCTW and numerous US Regulations continued to affirm that the master was in charge and in control of the vessel, ultimately responsible for the safety of the crew and potentially liable for damages arising from regulatory enforcement actions stemming from vessel operation. There was no getting away from this.

However, today’s interconnected shipping industry and increased communications and oversight whilst the vessel was at sea had pushed the regulatory regime ashore—-mainly through the ISM Code. This set out the company’s responsibilities and named the designated persons responsible for making sure the Code was observed. Shore-side management was now responsible for ensuring the master had adequate resources and shore-based support to meet safety and pollution prevention requirements.

With extended responsibility came extended liability for violations of regulations, encompassing the master, owner, agent and operator. This extended criminal liability to the owner or charterer or any corporation executive officer for knowingly and willingly causing or allowing fraud, neglect, connivance, misconduct or violation of law.

Civil penalties were usually taken against the company, owner or operator but could be pursued against the master. Criminal referrals were “the largest hammer in the tool box” but were not much used. There were more than 57,000 port state control boardings by the US Coast Guard from 2010 to 2015. These yielded just 92 environmental crimes referrals, only two of which resulted in a master’s conviction.

Delivering a vote of thanks, LSLC Council member and HFW Partner Jonathan Webb paid tribute to the work of Dr. Aleka Sheppard, the Centre’s Founder and Chairman, in spearheading the organisation of this Cadwallader Debate and 13 previous Cad events. “It is a tribute to Aleka and her colleagues that the subjects and speakers have continued to attract such tremendous support.”