Today, November 9, 2016, at 20.00 hrs, the anniversary of one hundred years since the foundation of the Union of Greek Shipowners was celebrated in the Athens Concert Hall (Megaron) (“Christos Lambrakis” Hall) with the participation of 1800 guests. The event was honoured by the presence of the President of the Hellenic Republic, Mr. Prokopios Pavlopoulos, and the Prime Minister, Mr. Alexis Tsipras. Moreover, several officials, presidents of political parties, Ministers, members of Parliament, ambassadors, leading personalities of the Greek political, entrepreneurial and banking sectors and several foreign guests participated to the event. Obviously, the entire Greek shipping community and its partners were present.

The guests had the opportunity to enjoy the singing of the children’ choir “Little Musicians” of the Conservatory of Athens and the Athens State Orchestra, which performed excerpts from the Greek contemporary folk music. Moreover, they watched the film “SEVEN SEAS” of the internationally renowned filmmaker Athina Rachel Tsagari. The film reflects the greatness of seamanship and shipping of Greeks in the international shipping arena. 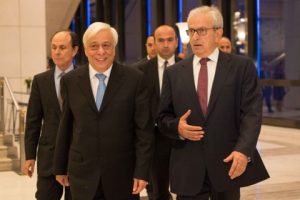 The arrival of H.E the President of Greece Prokopis Pavlopoulos

The President of the Union of Greek Shipowners, Mr. Theodore Veniamis, in his welcoming speech stated, inter alia:

“Our Union, the “house” of the Greek shipping family, has completed one century of existence, one hundred years of progress and of dynamic presence. Through its historic process, indeed it proves the importance and the superiority of collective action over the years in defending the institutional interests of Greek shipping, a difficult, demanding but also honourable task. 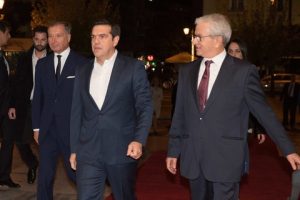 From the arrival of Greece’s PM Alexis Tsipras

One hundred years in the life of an association which lived / followed closely all the turning points in the recent history of our country. The 16 past Presidents of our Union, the 231 elected members to our Board of Directors and their history of succession express three fundamental principles which guided its work over the years: continuity, consistency and seriousness”.

“Our Union since its foundation has always been and remains the ambassador of Greek shipping in international fora, following balanced and realistic positions and the official and responsible interlocutor with the Greek state for all issues pertaining to this field. It has always represented and continues to represent a balance between the interests of all the members of the shipping community, without discrimination between small and big shipping enterprises, operating under the fundamental principle that Greek shipping encompasses the entirety of its members, the elected members having the moral duty to defend the interests of all through the power conferred by our collective institutional instrument”. 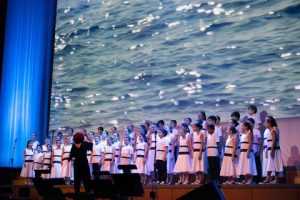 What a lovely singing that was

“Our shipping, has won per se a leading position in a competitive global market. It does not transfer its problems to the society but, on the contrary, it contributes to the national economy. It does not seek “facilitations” from politicians of the country. It prompts politicians to develop a strategic approach, realizing deeply which is the only sector of the national economy in which the country can be a “champion”, subject to the basic condition to be allowed to remain competitive. It does not identify with political parties but in the eyes of all international observers, it identifies with Greece”.

“I will remind you that from the age of sail boats and thereafter steamboats, Greek shipowners, always first in adopting technological progress in shipbuilding, were pioneers in maritime transport, having the biggest percentage of the international commercial fleet, but were scattered for several decades in maritime clusters around the globe. 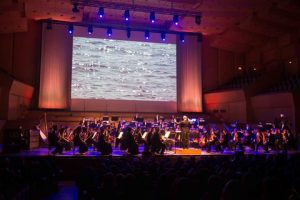 However, their longing (“the nostos” of Ulysses) for our country was always deep, awaiting for the right moment in order to link their entrepreneurial achievements with Greece. When this was made possible by circumstances, they immediately responded to the national call and returned to their homeland to develop close links with our country.

I would like to give the message from this podium today that Greek shipping is a national asset, beyond political parties, with a decisive and multifaceted economic, political and strategic importance for our country, and it sincerely wants to maintain its presence in its homeland”.

“The anniversary today gives us the opportunity to reset together our high targets and to commit ourselves morally for their achievement. Our targets should be: first, to continue offering to our country the highest privilege to have the first position internationally – this is our business target and national target – and second, to maintain our Union, our powerful and institutional representative instrument. The Union has indisputably proved that it is the caretaker of the legitimate principles of our shipping sector. We should not forget that collective action and a single voice confer power and prestige. The rallying of our shipping family round our Union, will continue to equip our most effective negotiating advantage, in order to overcome adversities whilst preserving passionately the leadership of shipping in Greece and beyond.

The invaluable heritage of one hundred years of the Union of Greek Shipowners is a guaranteefor the future”.