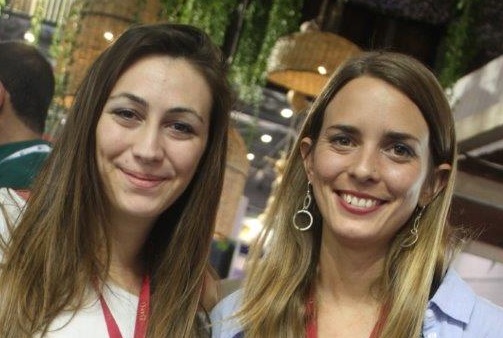 Many Greek islands are favoured by holidaymakers for attractions topped by sun, sea and sand, but one such spot in the southern Aegean has one of its most important sights below ground.

The landscape of Antiparos is described by its tourism office as “a whitewashed ensemble bathed in bold brush-strokes, in the clear blue Aegean Sea.” In the centre of the island is the Cave of Antiparos, described as one of the most beautiful and mysterious caves in the world.

The small island took its place among other Greek destinations and giant and niche travel industry operators at the World Travel Market 2016 in London from November 7 to 9. On behalf of Antiparos, Antonia Kanetouni and Iliada Stavrinidi were among a strong team promoting Aegean interests. 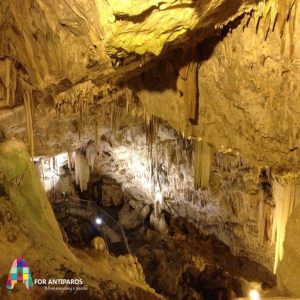 It was an opportune time, as tourism minister Elena Kountoura announced that 2016 would be the busiest year with a total of 27m international visitor arrivals, including cruise disembarkations.

Antiparos is under one nautical mile from Paros, to which it is connected by a local ferry.

The Antiparos promotional message refers to monuments and other symbols that speak of the creators of the Cycladic civilisation who lived in the island. A brochure says: “Today, thousands of tourists visit our island to admire one of the most beautiful and most ancient caves in the world, the archaeological sites, the amazing views found scattered in every corner of our island, the beautiful and clean beaches, the picturesque flagstone-paved lanes, the fresh fish, the grilled octopus… “

The Cave is close to the mountain of Ai Yianni. Used as a refuge during the Neolithic period, the cave has provided exciting archaeological finds. For a while it was dedicated to the goddess Artemis. 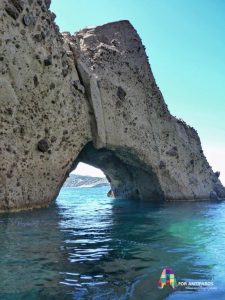 Inscriptions and engravings on stalagmites and stalactites have been described as “like a kind of guest book, whose first page was written hundreds of year before the birth of Christ” and fascinate all who these days take the tour. Archilochus, the Greek lyric poet from Paros, was perhaps the first distinguished visitor.  Legend says that the Cyclope Polyphemus, son of Poseidon, lived in the cave and welcomed Odysseus.

The Kastro of Antiparos, built by the nobleman Loredano, constitutes a single, autonomous, residential unit. The tourist literature says: “The complex was arranged around a square courtyard, in the middle of which rose a central tower, the base of which remains. The perimeter was composed of 24 two-storey dwellings with a continuous, high external wall 3 m wide, without balconies or large windows. Access to these houses with their marble door-frames was through the interior courtyard; and there was only one exit, on the southern side, secured by a Gothic gateway. Later, 24 two-storey residences were built around this central nucleus, and this new quarter was named Ksopyrgo, meaning ‘outside the tower.’”

Uninhabited islet Despotiko, to the west of Antiparos, “to this day retains all of the mystery and magic of a pristine landscape, nearly untrodden,” the literature says. “The sanctuary of Apollo and Artemis, which once gathered a multitude of faithful, today attracts a multitude of admirers of ancient Greek beauty, which shines under the Cycladic sun, next to turquoise waters, in the heart of our archipelago.” Saliagos island is claimed to be the most ancient settlement in the Cyclades.

From Athens, one can take a 20-minute flight from Eleutherios Venizelos Airport to Paros, or a four and a half hour voyage by ship from Piraeus port or Rafina port. Then from Paroikia on Paros, a car, taxi or bus to Pounda to catch a ferry for the final seven minutes to Antiparos. Small boats run from Paroikia and they take 25 minutes.

* Due to technical reasons for a better lay out, we include the full length and extent of the first picture depicting also part of the Antiparos’ stand …banner 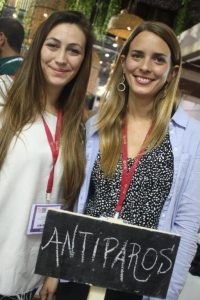 The Cargo Shipping Transport Market is projected to grow…