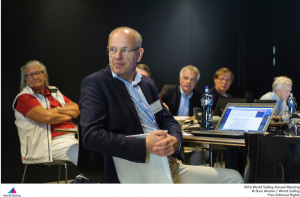 Kim Andersen has been elected as World Sailing President at World Sailing’s General Assembly as the 2016 Annual Conference drew to a close in Barcelona, Spain.

The President and seven Vice-Presidents, two of which must be female, were voted for by World Sailing’s full Member National Authorities, all of whom are entitled to be represented at the General Assembly.

Joining the World Sailing President on the Board of Directors will be:

The new Board of Directors will serve a four-year term up until the General Assembly in November 2020.

Alongside the Election of Officers, the General Assembly confirmed that the ten events and equipment used at the Rio 2016 Olympic Sailing Competition will be proposed to the International Olympic Committee for the Tokyo 2020 Olympic Games. World Sailing Council will now consider the possibility of requesting an 11th Olympic medal and the type of event.

The General Assembly marked the end of the 2016 Annual Conference. Across nine days of meetings, more than 1,000 delegates have attended a variety of Forums and Committee meetings to discuss, debate and share best practice to take the sport forward into the new year and beyond.

BW Convention -The eggs are broken. Compliance is non-negotiable.