Top Posts
The BDI drops down to 1,540; Wets maintain...
John Faraclas of All About Shipping contributes to...
Irene Rosberg addresses the 22nd Parliamentary Intelligence-Security Forum
Ready to hit the water? So are these...
Coach Fall/Winter 2022: A Collection That Feels Like...
Badgley Mischka Fall/Winter 2022: Wearable Sculpture in Ultra-Chic...
Power, philosophy and heroism of central bankers, and...
New superyacht goes up in flames
American Club Circular no.23/22 – EU Sanctions –...
Hot Port News from GAC
Ulla Johnson Fall/Winter 2022: Organic Forms and Nature’s...
American Club Member Alert (August 12, 2022) re...
Witherbys leads the way in digitisation as 5,000...
Home HRArt and auctions Vis-à-vis: radiant India-inspired paintings by Adria Arch and Anne Krinsky 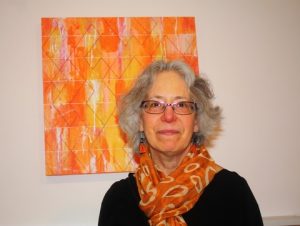 Two artists are celebrating a seven week immersion in the culture of northern India, with an exhibition in London of glorious compositions inspired respectively by vibrant fabrics and by shadow puppets of Hindu divinities.

Anne Krinsky and Adria Arch display their striking works at ARTHOUSE1, a gallery in Bermondsey south of the Thames. Friends since college days, the women have produced works joyously on the edge of abstraction which complement each other perfectly.

Entitled Vis-à-Vis the alluring display continues at the gallery (its name is a play on its London SE1 address) until December 4 2016. With its soothingly subtle decor and wooden flooring, the gallery is managed by the respected designer and ceramic sculptor Rebecca Fairman,

Anne and Adria differ in their artistic practice, but share the ability to produce a colourful acrylic lyricism, Anne conveying pure abstract rhythms and Adria with more serendipitous narratives.

The genesis of the exhibition was an invitation by Anne who is now based in London to Adria who lives in Boston, Massachusetts to join her on a tour beginning with a four week stay at the Sanskriti Foundation in Delhi. Established in 1978, the foundation is a public charitable trust that sets out to be a catalyst in “revitalising cultural sensitivity in contemporary times.” The centre includes workshops and studios, and museums of Everyday Art, Indian Terracotta and Textiles: “Our vision is to build upon our collections and to transform our museums into a central resource hub for all research on the art and craft traditions of India in general, and particularly in our core areas of terracotta, textiles and everyday objects.”

Anne and Adria eagerly seized the opportunity to learn from the skilled craftspeople at the centre, and study textiles and artefacts that are among the foundation’s treasures. At the same time, the visiting duo came to appreciate that the grounds of the foundation were “a serene oasis in the chaos and noise of Delhi traffic and street life. “

Anyone chatting with the two artists today can have no doubt about their utter delight in the whole experience (spelled out too in a beautifully illustrated blogs of the sojourn compiled by Anne and Adria).

They visited markets and museums, met artisans at paper factories and textile workshops, and dipped into the hectic daily life of the capital, “but neither could imagine the unique and exciting inroads they would…make into their already insightful personal aesthetics,” wrote Dr Mary Tinti, curator of the Fitchburg Art Museum for the catalogue of the first exhibition of Vis-à-Vis, which was at Soprafina Gallery in Boston in April 2016. The two found new ways into their practices “vis-à-visdistinct forms of Indian folk art,” affirmed Dr Tinti.

For Adria, who eschews conventional painting methods, the overwhelming moment was viewing an exhibition of shadow puppets of Hindu gods and goddesses. The puppets, mainly from Andhra Pradesh state, were painted on stretched and cured goatskins. with many joints.

The array directly motivated her to the particular ‘poured paint’ compositions that are now on show in London. In this technique, as Dr Tinti says, “contours are choreographed partly by chance, with their lush colour and joyful forms capering through the visual field.” Adria eagerly set to work in her studio in the Sanskriti Foundation complex, spilling paint onto sheets of Mylar resin, “a material that in many ways mimicked the translucency of the puppet parchment.” She cut out and glued the forms to printmaking paper, adding images to construct fanciful narratives.
Anne was struck by the colour combinations and patterns of Phulkari (flower embroidered) textiles from the Punjab, which led her to produce a series of studies on Khadi handmade rag paper attached to panel. 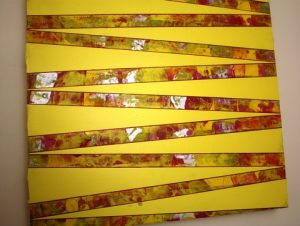 While appearing washed and weathered, the colours of these works still are gorgeous, with red, marigold and saffron fields competing with geometric lines. Anne discovered by chance that when the paper was folded, it imparted a new dynamic to the layers of paint. “The folds catch and absorb the acrylic differently than the rest of the sheet does. When the paper is folded into volumetric forms, the grid becomes fully three-dimensional.” The result was described by her as evoking “the worn surfaces of India, a result of both natural and man-made forces.”

She says: “I am interested both in the geometric regularity of repeated pattern and in its disruption.”

After her residency in New Delhi, Anne travelled to Jaipur to research textile block-printing methods in workshops and in the collection of printed textiles in the Anokhi Museum of Hand Printing.

In an indication of the variety of her experimentation, Anne at one stage wrote: “I have painted and printed on heavy Khadi papers, on the last of my fragile cilantro paper, on rice paper and on indigo and betel-nut burnished papers with their lovely dark grounds and smooth surfaces. I have been printing on both sides of the papers, leaving open the possibility of later using them as elements of an installation that could be viewed from multiple locations.” She added: “Some of these Khadi papers seem quite indestructible.”

She stayed with Devena Singh who runs ArtInn Jaipur, a guest-house that offers block-printing workshops on the premises, a cottage designed by a German architect which hosts many overseas visitors. “The day after I arrived, I began printing blocks on the fabric-covered printing table, with the expert guidance of printer Gopalji, who also prints fabrics for Devena.” 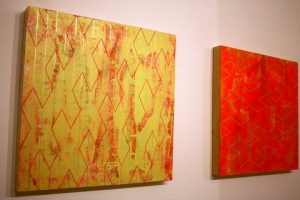 Seeing an exhibition of woven fabrics from remote tribal areas, Anne wrote: “The instinct to make something beautiful seems universal. Why else go to the trouble of dyeing cotton and silk and weaving intricate and sophisticated patterns when simply functional cloth would suffice?”

Adria added: “All that local colour, the markets, the painted trucks along the highway, the beautiful Hindi script everywhere mashed up with ads for Pepsi, Vodaphone and Airtel. I came back to Sanskriti with all that colour and all those baroque Indian shapes in my head.

“The Taj Mahal is one of the great wonders, but honestly, I loved the markets more.”

“Part of the experience of doing a residency at Sanskriti Foundation in Delhi is having access to extraordinary exhibitions like [Threads of Change at the Indira Gandhi Centre for the Arts] where weavers set up shop during the day.”

Of the field trip seven hours distant to Jaipur with another artist friend, Hartash Dale who produces abstract paintings and screenprints in her studio in southeast London, Adria wrote: “Jaipur is the heart of north Indian textiles and papermaking. We were very fortunate to visit several factories and watch the process. We might as well have been in the 18th century. Hard physical labour and painstaking hand work which would cost a fortune here in the first world is available at a fraction of the cost in India.”

For her research into Indian textiles, Anne received an Artists International Development Fund grant from Arts Council England and the British Council.

The friends concur that: “life’s rich pageant is made richer through cultural exchange. Spending a month in a foreign country drinking in the cultural differences is an experience we all cherish, if we are so fortunate, but for artists, this kind of opportunity is gold. The sights, smells, sounds, textures, and visual stimulation of another country are like no other inspiration – it is a total sensory infusion.” 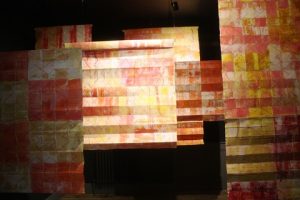 ‘In the Field’ hangings by Anne Krinsky.

Anne has meanwhile been furthering her Tide Line Thames project which is part of the Totally Thames Festival and was revealed to the public in an exhibition at Thames-Side Studios, Woolwich, in September 2016. In September 2017 she will take this an ambitious step further with an installation of projected imagery in the Thames Tunnel Shaft, Brunel Museum, Rotherhithe – the display will consist of projections because it is forbidden to hang artworks in the tunnel.

Anne says that her installations take as their subject “the shifting riverscape and its architectural structures – embankments, piers and river stairs – between the Thames’s high and low tide lines.” For this, she made an archive of photos of the river and its structures over six months. She completed five acrylic paintings, layered with fluttering pieces of tape and architectural drafting film, creating images “of fragile tactility,” as the critic Jessica Clifford states, “embedding the history of the River Thames.” Ms Clifford goes on to give a 1929 quotation from politician John Burnes: “The St Lawrence is mere water.  The Mississippi is muddy water.  The Thames is liquid history.”

The World Mail and Express Asia Conference arrives in Singapore