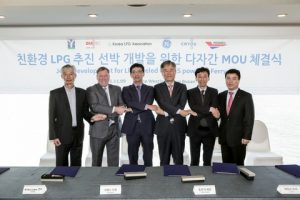 As this is the world’s first LPG-fueled COGES ship, the LPG industry is actively taking part in this project. For instance, FESDEC is handling the ferry design, and Cryos brings extensive experience in designing and manufacturing LPG fuel tanks.

According to Brien Bolsinger, Vice President of GE Aviation’s Marine Operations, “There is increased attention worldwide on LPG as a viable fuel for the maritime industry, and we are excited to collaborate on this ferry project. The compact COGES arrangement—lighter and smaller than comparable four-stroke diesel engines— will allow for more passengers. Owners, operators, designers and shipyards will see that the COGES system also offers lower life cycle costs.”

In fact, GE gas turbines are no stranger to the seas and no new technology is required to construct GE‘s COGES system. Instead, GE is configuring existing products and integrating them into new applications. GE gas turbines operate on cruise ships, eight of which feature COGES arrangements. Other commercial marine applications include fast cargo ships, high-speed yachts, offshore platforms, and floating production and offloading ships. The same gas turbines are used by 34 navies worldwide for defense; now commercial marine customers can experience the benefits of this propulsion system solution through the efforts including this MOU.

Youngsung Global CEO Bumsu Ku said, “The new eco-friendly LPG-fueled ferry will operate the Incheon-Jeju and other international passenger routes. Also, with the use of LPG, we expect to save on operational costs and contribute to reducing our global environmental footprint.”

Korea LPG Industry Association Chairman Joonsuk Hong said, “The LPG-fueled ferry to be developed through collaboration between GE and LPG-related technology companies will contribute to the growth of Korea’s LPG and shipping industries. In addition, it will be a good opportunity to use Korea’s existing LPG bunkering infrastructure.”

FESDEC CEO Jungkang In said, “We are happy to participate in the development of the world’s first LPG-fueled COGES-powered ferry. We will design a ferry that offers stability, efficiency and economic value.” Cryos CEO Daesung Kim also said, “Based on our expertise in manufacturing LPG fuel tanks, we will collaborate with GE to build a world-class LPG-fueled ferry.”