Top Posts
Don’t take chances where your health is concerned…
How Greek shipping can cut costs and improve...
GLOBAL & REGIONAL DAILY (Thursday 13 May, 2021)
RMT calls for action to protect seafarers’ mental...
Poseidonion Grand Hotel welcomes you back on May...
Large Diameter Drilling to partner with DEME Offshore...
Cyprus Ship Management Round Table Webinar and Debate
Lady Moura up for sale… plus more
Will the dollar decline? The changing landscape of...
TSUNEISHI SHIPBUILDING collects actual operation data by IoS-OP
Deltamarin is proud to be a part of...
Home Associations WISTA Sets Sail into the Future
AssociationsConferences, Seminars, ForumsEventsWISTA - Women in Shipping

WISTA Sets Sail into the Future 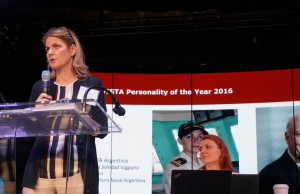 November 17, 2016 – More than two hundred and twenty-five shipping and trading executives from 30 countries joined the Women’s International Shipping & Trading Association (WISTA) aboard the ms Koningsdam, Holland America Line’s newest vessel, on November 9–13th for the WISTA 2016 International Conference and Annual General Meeting.   The Conference, hosted by WISTA USA under the leadership of its President, Alexandra Anagnostis-Irons of Total Marine Solutions, featured the Annual General Meeting (AGM), a robust Conference program agenda, and a variety of workshops designed to transfer knowledge on the industry, leadership, and growth.

WISTA International President, Karin Orsel of MF Shipping Group, opened the AGM by underscoring the dramatic growth of WISTA, which is now active in 40 countries and boasts nearly 3,000 members.  This growth has been fueled by its successful networking, representation of the entire industry at the membership level, and collaborations with other international organizations.

As part of the Conference, WISTA honors an individual in the maritime community for their professional excellence and outstanding achievements. For the first time in WISTA history, the 2016 Personality of the Year award honored two individuals: Rod Jones, President and CEO of the CSL Group, and Captain Analia Soledad Viggiano of the Argentine Coast Guard patrol vessel Madryn.  Rod Jones, who has enjoyed a lifelong career in the shipping world, including as an officer in the United States Navy, and various roles at Navios Corporation and Van Ommeren Shipping.  In 1985, he joined Canada Steamship Lines and rose to be president and CEO of the CSL Group in 2008.

Captain Viggiano is the first woman in the Argentine Coast Guard to receive command of a patrol boat, having served in the Coast Guard since 2003 and working her way up the ranks.  In 2013, she received her Master’s degree at the World Maritime University in Malmo, Sweden where she began to fully appreciate the value of diversity in all its many forms.

Holland America Group Executive Vice President, Fleet Operations, Keith Taylor, joined the Conference and introduced ms Koningsdam Captain Emiel de Vries, Chief Engineer Willem Zuidema and Hotel Director Don Habets, who spoke about the construction, new technologies, operations, and challenges associated with running a ship that is also a floating hotel.  Holland America Line President Orlando Ashford then spoke to the group about of the challenges he faced as an African American in the corporate world and challenged the group to find their own way to give a larger purpose to their professional achievements.

A panel on trends and challenges for ports and shipping was headlined by CSL’s Rod Jones, with presentations by Diane Edwards,  General Manager People, Systems and Technology at Ports of Auckland Limited, Parker Harrison, Vice President, Procurement at Crowley Maritime Corporation, and Kate Belmont of Blank Rome LLP.

Small group workshops included WISTA as a catalyst for international trade, shipboard environmental systems, women in leadership in the marine industry, and the state of shipping transport and trade in Asia.

The Women’s International Shipping & Trading Association (WISTA) is an international organization for women in management positions involved in the maritime transportation business and related trades worldwide. WISTA is a major player in attracting more women to the industry and in supporting women in management positions.  With networking, education and mentoring as our focus, we can enhance members’ competence and empower career success.  Founded in 1974, WISTA has grown to include 40 National WISTA Associations with nearly 3,000 members worldwide.  For more information, go to www.wista.net.