Top Posts
Don’t take chances where your health is concerned…
SH Payments appoints Justinas Basalykas as CEO and...
How Greek shipping can cut costs and improve...
GLOBAL & REGIONAL DAILY (Thursday 13 May, 2021)
RMT calls for action to protect seafarers’ mental...
Poseidonion Grand Hotel welcomes you back on May...
Large Diameter Drilling to partner with DEME Offshore...
Cyprus Ship Management Round Table Webinar and Debate
Lady Moura up for sale… plus more
Will the dollar decline? The changing landscape of...
TSUNEISHI SHIPBUILDING collects actual operation data by IoS-OP
Home HRAwards ClassNK picks up Environmental Protection Award at IBJ Awards 2016
AwardsClassification SocietiesEnvironmentEventsPeople and PlacesPress and Media 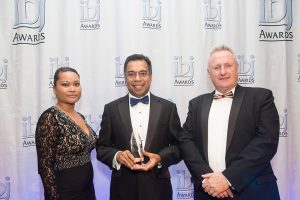 London – ClassNK picked up the Environmental Protection Award for its activities at the IBJ Awards held on 21 November. This award recognizes organizations that have made significant contributions to reducing marine pollution.

Aiming to ensure that ships being recycled at the end of their operation lives pose less risk to human health or the environment, the IMO adopted the Hong Kong International Convention for the Safe and Environmentally Sound Recycling of Ships, 2009 (HKC).

The HKC requires to develop and maintain the ship-by ship Inventory of Hazardous Materials (IHM) identifying the quantity and location of hazardous items on board, and to develop Ship Recycling Facility Plans (SRFP) and Ship Recycling Plans (SRP) in line with the proposed requirements of the convention at the recycling stage. ClassNK has been proactive in supporting compliance to new regulation throughout the industry.

ClassNK provided “PrimeShip-GREEN/SRM” a cloud-based software solution that creates the IHM almost automatically from the shipbuilders’ input of product locations, which has quickly grown to become the de facto world shipping standard. The software significantly reduces the man hours that it would typically take to manually input the location and quantity of hazardous materials contained on vessels.

The Board of Oslo Børs approves Skandiabanken ASA for listing