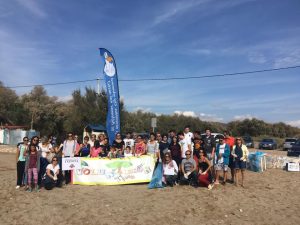 A total of 4,560 volunteers participated in the “Month of Voluntary Action for the Marine Environment”, which was coordinated by HELMEPA from 17 September to 17 October in Greece in the framework of ICC 2016. These volunteers organized and carried out 89 beach and 16 underwater cleanups throughout Greece.

Under the motto “We clean our beaches, record and recycle marine litter!”, children and youth, members of the “HELMEPA Junior” and “Cadets” programs respectively, as well as other students and teachers, staff of HELMEPA members and other companies, municipal and port authorities, members of environmental organizations and sailing clubs, divers and citizens actively participated in this initiative.

At Karnagio in Rhodes island

The volunteers cleaned up 81 km of beaches and shores of rivers and lakes, collecting and recording on data cards 13 tons of litter, of which 2.5 were recycled in cooperation with the Hellenic Recycling-recovery Corporation (He.R.R.Co.).

In total, volunteers collected 124,560 pieces of litter, from the tiniest pieces of plastic to a kids slide and a couch! 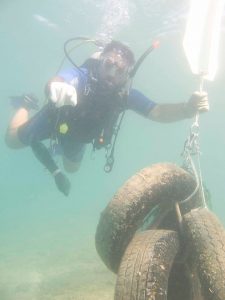 …at the Vouliagmeni Lake, Attica

Cigarette butts are by far the No. 1 marine litter item, while prominent in the Top 10 list are plastics associated with recreational activities in the coastal zone and take a very long time to break down in the environment. Let’s not forget that a plastic bottle, which we may easily leave behind on the beach, needs approximately 450 years to break down into smaller fractions and finally microplastics that enter the food chain and end up on our plates.   Small pieces of plastics, foam and glass constitute 17% of the total items recorded.

During cleanups coordinated by HELMEPA in Athens and on the islands of Aegina and Skiathos, online recording of litter items were performed with te use of smartphones and tablets in the framework of the “Marine Litter Watch Month” of the European Environment Agency (ΕΕΑ), which aims at the scientific monitoring of pollution.

HELMEPA congratulates all the volunteers because through their participation they support efforts to reduce pollution and degradation of marine and coastal ecosystems. Commemorative participation Diplomas were awarded to the coordinators of the actions, as well as the children and youth that participated.