BraemarSA favours traditional training to counter the over-reliance on technology 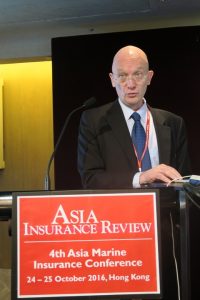 Speaking at the conference, Mr Temple said: “The rising number of crew errors is a concern to me, but I believe this can be addressed with the right training and commitment. Too often, we see the use of technology increasing at a faster rate than the employment of traditional training. This puts human vigilance and interaction in jeopardy.

“We should embrace new technologies, but not at the expense of undermining, and possibly even foregoing, traditional training. These must be used together, to help cover every eventuality and to prevent casualties from occurring. For example, a watch keeper relying on navigational systems to guide the vessel is potentially putting the ship at risk if the watch keeper does not actively engage with their duties in the traditional way – with their eyes and ears. Similarly this is the case with machinery monitoring, where the increasing demand on modern machinery is leaving little room for errors on sensitive equipment.”

During his presentation to industry stakeholders – including shipowners, managers, cargo operators and underwriters – Mr Temple spoke of the drop in vessel casualties and urged delegates not to neglect “tried and tested” skills. Mr Temple also welcomed the use of the International Safety Management Code and the Maritime Labour Convention as examples of how the industry is addressing failures.

Summing up, Mr Temple said: “We must not ignore the basic fundamentals of training, skills which have been drilled into our industry over the past millennia. Technology has helped prevent casualties, but an over-reliance on technology at the expense of traditional training can be an obstacle to preventing vessel casualties.”