Hampshire’s Steve Mason (65) is realising his record-breaking ambitions by joining the crew of Team Britannia, the round-the-world powerboat record attempt.

The electrical engineer, who was born in Gosport, will join the round-the-world powerboat, which hopes to cut up to seven days off the current record of 60 days 23 hours 49 minutes, held by New Zealander Pete Bethune.

Team Britannia, led by British ocean racing legend Alan Priddy, will use a revolutionary semi-wave slicing boat that will carve through the waves, rather than surfing them. The super-efficient design, a variant of the “fast displacement hull” will reduce fuel consumption by up to 30 per cent and make the 24,000 mile trip smoother and faster.

The boat will be crewed by a team of 12, including up to five wounded, injured and sick servicemen and women (WIS) on each of the seven legs of the voyage who are being supported by the Royal Foundation’s Endeavour Fund.

Mr Priddy commented: “I am really excited to be reunited with Steve Mason in our latest round-the-world record attempt. As well as having excellent nautical experience – taking part in the 2006 Lively Lady Project – Steve’s position as Team Britannia’s Technical Manager recognises his valuable engineering skills. These are chiefly demonstrated by the revolutionary Clean Fuel that will be powering our record attempt.” 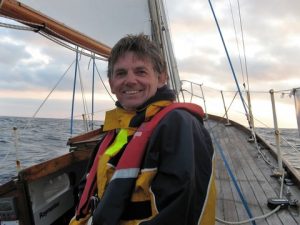 Steve added: “This challenge represents a dual opportunity – beating the powerboat world record and doing it in an environmentally-friendly way. Clean Fuel’s emission-cutting technology will give us a crucial edge as we take on this arduous challenge – I’m glad to be doing it as part of an experienced and dynamic team.”

Steve, who lives in Warsash, will be Team Britannia’s Chief Engineer as well as Technical Manager.

A qualified BWSF (British Water Ski and Wakeboard) tournament Ski boat Driver, Steve is also a MCA (Maritime and Coastguard Agency) RYA (Royal Yachting Association) Yachtmaster. He joined the team of the Lively Lady Project and in 2006 skippered her on the northwest Atlantic, Indian Ocean and Mediterranean legs of her circumnavigation.

It will be launched in late 2016 and will then commence sea trials. The record attempt will get underway early next year using the iconic Europa Point in Gibraltar as its timing mark.

To complete the record attempt the boat must pass through the Suez and Panama Canals, cross the Tropic of Cancer and the Equator and start and finish in the same place. The world record authorities, UIM (Union Internationale Motonautique) have approved Team Britannia’s proposed route, which will start in Gibraltar and call at Puerto Rico, Manzanillo, Honolulu, Guam, Singapore, Oman and Malta to take on fuel.

Mr Priddy concluded: “We are at a crucial and exciting point in the project. The boat is being built and we are putting together our team, both shore-based and those who will take part in this epic challenge. Getting the right team together is crucial if we are to smash the current record and I am delighted to be reunited with Steve’s skills and experience as we look to make history.”

The whole construction process is expected to take around nine months before it starts a programme of sea trials around the UK.

Team Britannia will launch their record bid in spring 2017 from Europa Point in Gibraltar.