IUMI gets ready for 2017 conference in Tokyo 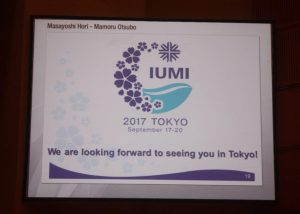 IUMI gets ready for 2017 conference in Tokyo

Planning is well underway at the General Insurance Association of Japan to host the 2017 conference of the International Union of Marine Insurance, from September 17-20 in Tokyo.

The IUMI flag was handed over to the Japanese delegation by the Italian organisers of IUMI 2016 in Genoa.

Ms Castellini thanked Genoa participants on behalf of “the city of Columbus” and said that the total attendance of 620 direct participants and 140 accompanying persons was a very good result. 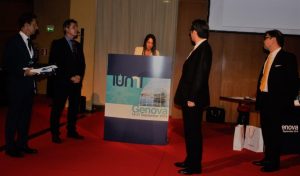 On behalf of the Japanese association, they expressed their “heartfelt sympathy” to the victims of the year’s Italian earthquakes, noting that Japan too had suffered in recent times from such tragedies.

IUMI president Dieter Berg on behalf of delegates in Genoa praised Ms Castellini and the team for their hard work as the driving force of a smoothly-organised conference.

Mr Hori and Mr Otsubo encouraged underwriters from around the globe to sign up for the 2017 conference.
They said that it will be the fifth occasion for the event to be held in Tokyo, and the year 2017 marks the 100th anniversary of the foundation of the GIAJ. 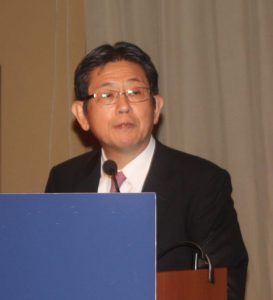 The new website for IUMI 2017 adds: “Therefore, it is our great pleasure that the historic and distinguished IUMI Conference will be back in Tokyo [for the first time since 2006] on such a commemorative year for us, and we look forward to welcoming as many of our marine insurance colleagues from around the world as possible.”

Tokyo welcomes 9m visitors every year, and the Olympics and Paralympics Games will be hosted by the city in 2020.

On the new website, the Tokyo IUMI organising committee says: “While you are here, you will be able to see many examples of further development as Tokyo, one of the biggest cities in the world, moves towards hosting these massive events.”

Although not officially confirmed at this stage, the IUMI 2017 welcome reception is expected to be at the National Museum of Emerging Science and Innovation, opened in 2001 and known as Miraikan, and the closing Japan evening at the Grand Prince Hotel, New Takanawa.

In October 2016, IUMI announced the opening of an overseas hub in Asia – the first time in the organisation’s 142 year history that it has established a permanent presence outside Europe. Mr Berg said at the time: “The Asian marine insurance market accounts for almost 30% of global premium income and global trade in this region continues to grow. The opening of our new Asian hub, based in Hong Kong, recognises this significant contribution. Through this initiative, we hope to align IUMI more closely with the activities and aspirations of our colleagues in Asia and ensure that IUMI remains relevant and of service to this very important region.”

Information will be updated on the IUMI 2017 Tokyo website www.iumi2017.com. Registration and reservation of the official hotels will start in April 2017.