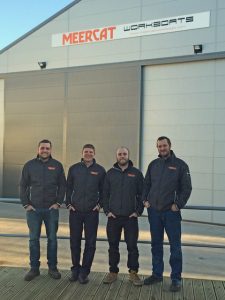 To coincide with the move the company’s management team has been restructured, two new vessels have been delivered and one new order confirmed.

The new site is 1,600 sqm, has two 20-tonne gantry cranes, a machine shop, an electrical workshop, a hydraulic workshop, aluminum welding bays, steel fabrication bays, dedicated stores, offices and customer parking.  A sum of circa £500,000 has been invested in the move.

The company has relocated in time to conclude two further builds: MC27 (a 14m workboat) and MC29 (a 15m workboat).

The team are also pursuing prospects for House Boats, Pontoons and Barges both locally and further afield.

The newly restructured management team includes Jason Coltman, who has recently returned to the business fresh from a summer sabbatical.

As part of the re-structuring, three new roles have been created. Ric Haselhurst has taken on the role of Production Manager, Jim Mair the role of Technical Manager and Tim Baily the role of Project Manager.

All four are key stakeholders in the business and will be the principle drivers of the business moving forward. Meercat employs 16 people in total

Nicholas Warren, the CEO of Burgess Marine, the parent company of Meercat Workboats, comments: “The move is exactly what the business needs.

“I’ve complete confidence in Jason, Ric, Jim and Tim as they lead the business going forward; they really are masters of their own destiny.

“They’re key stakeholders in the newly restructured company and I firmly believe that they can grow the company effectively and independently.”

He goes on to say: “Burgess Marine is a business that’s been built by individuals that genuinely do care.

“The same care and attention goes into each and every Meercat and it’s that passion that gives me complete confidence in the new management team and the business.

“Across the group we’re investing in plant, equipment and accreditation and we see Southampton and the Solent as the focal point for all our key initiatives.”

Jason Coltman comments: “It’s great to be back in the boat building business and over time Ric, Jim, Tim and I, along with the entire team here at Meercat fully intend to develop the Meercat brand and product range to be the very best in the workboat business.”

He goes on to say “We’re newly independent and entirely committed to building both the business and our own standalone reputation.

“We’ve proven this by succeeding in a hard-fought pan-European public tender for ABP’s new Southampton based workboat.

“This vessel, hull number MC30, will be a 15m boat and she’ll be built right here in Southampton and delivered to the port early in the New Year.”

He concludes by adding: “Whilst we’re intent on building more traditional Meercat’s we’ve also got pontoons, tugs, barges, house boats, RIBs and landing craft on the near horizon and some very exciting core Meercat product develop to include hybrid propulsion for the aquaculture sector – watch this space!”

Exact financial details of the relocation were not disclosed.

Burgess Marine is at the forefront of the specialised marine engineering and services industry, having earned a worldwide reputation as experts in all aspects of structural repairs and renewals as well as mechanical repairs both above and below the waterline.

With workshops and offices in Lowestoft, Dover, Portsmouth, Portchester, Southampton, Poole, Avonmouth, Devonport, and within STP Palma the business is ideally located not only to support the UK’s largest passenger ports, but also shipping in general throughout the United Kingdom and Superyacht’s based in Western Mediterranean.

The business has three further tranches; it focuses on marine procurement for the Superyacht, commercial and cruise ship sectors via ‘Global New Builds’ and ‘Global Services’, it builds workboats under the ‘Meercat Workboats’ brand from a dedicated new build location in Hythe, Southampton, and technically supports the operation of Superyachts under the ‘Trafalgar Yacht Support’ brand.

Burgess Marine is committed to operating within the parameters of leading international management system standards and is therefore accredited to ISO 9001 (Quality), ISO 14001 (Environmental) and BS OHSAS 18001 (Health and Safety) respectively.

Worsening Markets and Geopolitical Tsunamis on the way…