Finn racers put to the test 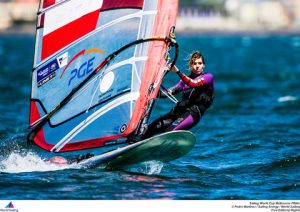 The top Finn racers at the Sailing World Cup Final presented by Land Rover are putting each other to the test and for Rio 2016 Olympians Jake Lilley (AUS) and Caleb Paine (USA), it’s business as usual after a period of rest.

Before the World Cup Final in Melbourne, Australia, Lilley and Paine last sailed a Finn in the Medal Race at the 2016 Olympic Games in Rio de Janeiro, Brazil.

Paine dominated the Medal Race, winning comfortably to leap dramatically up the leader board and claim bronze and Lilley came through in fifth to finish eighth overall. The pair stepped away from the men’s heavyweight dinghy after the Games to focus on new ventures but they wasted no time in revisiting their competitive streaks at the World Cup Final, battling it out at the front of the pack.

After four races Lilley holds the lead on four points and is trailed by Ed Wright (GBR) on six and Paine on seven.

Following Rio 2016, Paine savoured being the sole American sailing medallist and even met American President Barack Obama at the White House in Washington.
Corporate events and formal greetings aside, he is happy to have hold of the tiller again. “It’s nice to be back in the Finn and great to be back out on the water again, and not feel any particular pressure at this point,” expressed Paine, recalling the pressure of not only winning an Olympic medal, but facing a hard-fought Olympic qualification battle against American teammate Zach Railey in the lead up. 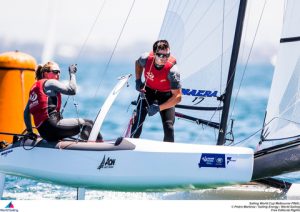 “I took a lot of time off and yesterday was my first day of Finn sailing since the Games. It takes a lot of time to process what the Olympics means to you and what it entails. The whole thing is massive and hard to put into perspective so I gave myself some time after the Games, which was really valuable.”

In Wednesday’s building south westerly sea breeze on the waters off the St Kilda Sailing Precinct foreshore Paine regained his strong form, picking up a race win and third to remain in the hunt for a World Cup Final medal and a share of the $200,000 AUD prize pot for Olympic classes and Open Kiteboarding.

For the Melbourne Final Finn leader Lilley, his focus after Rio 2016 shifted to the America’s Cup as part of the Artemis Racing team. Much like Paine he has not sailed the Finn since August but the natural instincts remain, “I’m stoked I remember how to do the whole Finn sailing,” smiled Lilley who has been sailing foiling Moths and catamarans since Rio 2016. It’s a bit strange to be back in the water and getting wet so much but I’m loving the competition. It’s so good to be in some tight races. There’s not a lot of margin for error and that’s the great thing about racing in a World Cup Final.”

Rio 2016 Olympic silver medallists Jason Waterhouse and Lisa Darmanin (AUS) continue to control the Nacra 17 fleet and made it five wins in a row, but New Zealand’s young guns Olivia Mackay and Micah Wilkinson halted the Aussies dominant run by winning the sixth race of the series.

The Kiwis recently won the Red Bull Foiling Generation, a Flying Phantom event open to sailors aged 16-20 in Newport, Rhode Island, USA. The win and experience of taming a “beastie foiling version of the Nacra,” put aptly by Mackay, puts them in a strong position as the Nacra 17 will go fully foiling for the Tokyo 2020 Olympic Games. 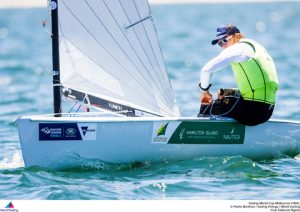 The first foiling Nacra 17 event is expected to be the 2017 European Championships next July and Mackay cannot wait for the new challenge, “I’m so excited for the class to go foiling,” she expressed. “Forty boats foiling into the bottom gate is going to be interesting and entertaining to watch. I think it’s an exciting change and we’ve got to be positive and embrace it.”

For now, Mackay and Wilkinson are focusing on the task at hand and have six fleet races remaining to haul in the leading Australians ahead of Saturday’s Medal Race.

Kiran Badloe (NED) and Zofia Noceti Klepacka (POL) were truly dominant in the Men’s and Women’s RS:X, winning all three races. Klepacka, bronze medallist from the London 2012 Olympic Games, missed out on selection for Rio 2016 but her class and style has endured, demonstrated by her supremacy today. Klepacka tops the leader board on 11 points and is followed by Marina Alabau (ESP) and Yunxiu Lu (CHN) on 17 points each. Badloe leads Ivan Pastor (ESP) by five points in the men’s division.

Oliver Bridge (GBR) proved human after all in the Formula Kite fleet, finally defeated in a qualification race. Having won ten races in a row, Florian Gruber (GER) beat him in the 11th, but Bridge was back to winning ways in the 12th. He holds the advantage going into the next stage of the competition.

Mat Belcher and Will Ryan (AUS) continue to dominate the Men’s 470, winning both of Wednesday’s races. Lara Vadlau and Jolanta Ogar (AUT) solidified their lead in the women’s fleet following a second and a first. They are four points clear of Carrie Smith and Jaime Ryan (AUS) who won the day’s other Women’s 470 race.

Marit Bouwmeester (NED) put some space between her and Anne-Marie Rindom (DEN) in the Laser Radial, taking a 1-2 compared to the Dane’s fourth and discarded five to hold a three point lead. Silvia Zennaro (ITA) remains third overall but Hungary’s Maria Erdi leapt up the leader board after a bullet and a fifth to trail the Italian by just five points with six fleet races remaining.

In the 49er and 49erFX, Isaac McHardie and William McKenzie (NZL) and Tess Lloyd and Eliza Solly (AUS) lead the men’s and women’s skiff respectively.

Gusts of over 35 knots are predicted to sweep into Melbourne overnight, potentially ruling out competition on Thursday if it sustains. Racing is scheduled to commence at 12:00 local time but an assessment on the conditions will be made in the morning